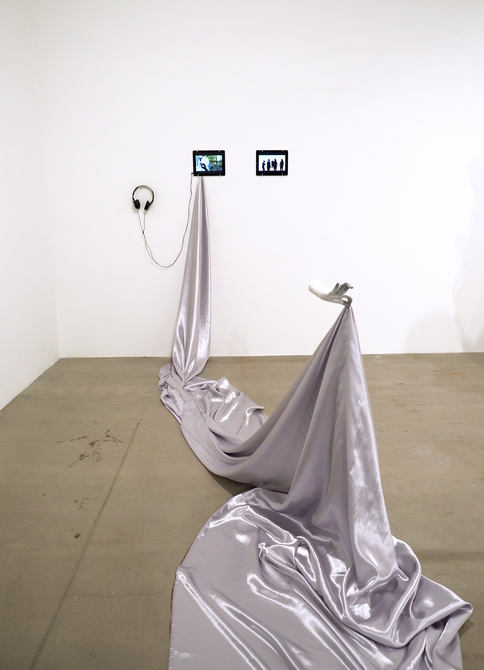 Text by Tereza Jindrová: We often encounter contradictory expectations of how visual art (and not only contemporary art) is to be presented and exhibited. On the one hand, there is a prevailing idea that a “good” work ought to speak for itself. And on the other hand, we expect that a service will be provided which will help us to “grasp” the work. In the large museums of art at any rate, one of the ways we can acquire information about works is by audio guides: recordings in a broad selection of world languages which, via number codes, make it possible to access more or less extensive commentaries on individual works or an entire section of the exhibition. An advantage of this is the greater flexibility of movement, because the viewer need not spend a long time standing before a text panel. We might identify a possible disadvantage, however, in the lesser flexibility of the act of listening. That is to say, we can master a text by scanning it with a rapid gaze, selecting from it the information that interests us; but ideally we should hear a recording from beginning to end, so to a certain extent it dictates the time we spend in the exhibition halls. There are ardent lovers of audio guides whose greatest passion is to go from one picture marked by the audio commentary symbol to the next, without taking any notice of anything else; there are also the sworn enemies of this facility, who see it as just another of the museum’s cunning tricks to squeeze more money out of the visitor. One thing is certain, however: if we have an audio guide in our hands, it influences our behavior in the gallery. This is precisely the moment that Šárka Koudelová decided to make use of in Choreographer of the Gaze. The content of the recordings moves between classical art-historical interpretation (a field which the artist happens to have studied and which she inscribes in her own work, examining traditional iconography and form), atmospheric interventions based on sound associations, and mildly disquieting moments when the “narrator’s” voice turns directly to us, so that what is supposedly an explanation for a group becomes almost an existential appeal. Much of the information that is made known to us has a communal, factual value, which at the same time clarifies the significance and symbolism of certain of Šárka’s images; but the audio guide as elucidating component gradually gets as far as an awareness of oneself as present, of the presence of other viewers, and consequently of the exhibition as a whole. The title delicately alludes to the fact that in one’s relationship to an exhibition there is always a more or less evident construction. The “choreographer” here may be an artist, a curator, an architect of exhibition, a museum director, or in purely general terms a particular canon which currently influences how things are presented and perceived. Accordingly, in this context there is ultimately nothing that isn’t symptomatic. That doesn’t mean we cannot enjoy the beauty and the sophisticated presentation of painting that has come about by careful and assiduous procedures over long weeks. But a question mark is, however, placed over the idea of perfect autonomy: the situation where only the work in its own right can exist and can be perceived in this absolute isolation. Text and sound commentaries, mutual displacement of artworks, and works which even repeat how certain other works have mirrored one another: all this creates a constellation that is ultimately unrepeatable. Given that an exhibition is a multiplicity of inter-relations, and that its preparation or indeed the creation of the individual works is not normally the unreservedly individual achievement of the artist, rather there are further actors who to a greater or lesser extent make their contributions – it is therefore appropriate to thank those without whom this exhibition would not have come about: Audioguide.cz, Ludĕk Kazda, (sound), Ondřej Basjuk (guitar), Tereza Koudelová (translation), Inspiro Tišnov Leisure Centre, and Jana Koudelová, Kateřina Koudelová, Alena Opltová, Helena Chvílová and Martina Matějková, who performed in the video, and the Czech Centre in Bratislava. Šárka Koudelová (b. 1987 in České Budějovice) studied at the Academy of Fine Arts in Prague, where she took her diploma in 2016 in Vladimír Skrepl’s class. She has also completed a study stay at the Academy of Fine Arts in Vienna with Professor Erwin Bohatsch and an artistic residence at the Egon Schiele Art Centre in Český Krumlov. In 2015 she won 3rd place in the Critics’ Prize for Young Painting. She regularly exhibits at independent and group exhibitions in independent galleries in Prague and Brno and in regional galleries (recently, for example, in the Cheb Gallery of Fine Arts, the, Jamborův dům Gallery in Tišnov, UKG Český Krumlov, and the Meetfactory Gallery in Prague).