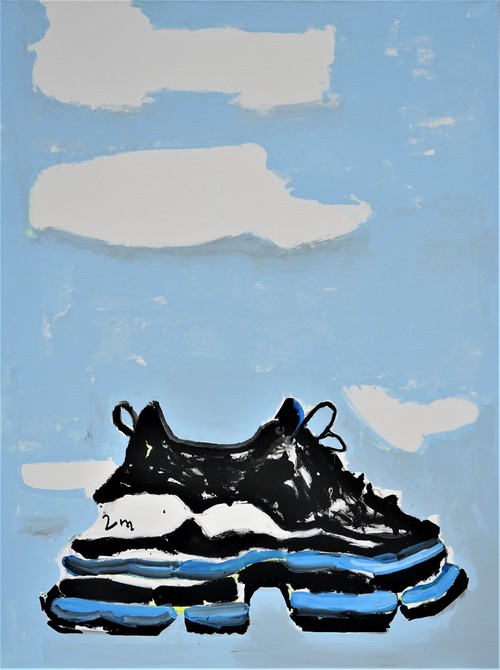 The project Chunky Steps mainly comprises of oil on canvas pieces, developed as a series of interlacing works. The idea of my series was developed during the lockdown caused by the global pandemic. I discovered new motifs that were influenced by products of the fashion industry. It is clear that the fashion sector reacts to the social alienations of the postmodern world by trying to compensate the void with an always changing illusion of the present, which reinterprets the past and the future constantly. This power of the ‘present’ that set the actual trend of the season is condensed in the pieces. In fashion, in the last couple of years, the tendency has been to mix timeless classic colours and patterns with futuristic oversized and experimental shapes. Using elements of different eras the fashion industry blurs the boundaries and creates an uncertain direction where we are overwhelmed in the superficial freedom of choice. In my paintings I place iconic sneakers designs of our time in lyrical landscapes settings. These plastic items, coming from the production line are excluding the artisanal knowledge and the craftsmanship we once prized and identified with design. The made to measure clothing has been restructured since the industrial revolution, with the emergence of ready-to-wear clothing, and continue to evolve and reinterpret itself on an ongoing basis. ​The increasing value of comfort and usefulness evoked a new kind of aesthetic, which lies in the ugly, the trash, the fetish of disproportion, hence logos and brands’ messages has seen a growth in size like never before. We have set a new world order based on these products that we cherish and love as if they were living beings and had souls. The series examines the phenomenon itself and the connection between its contrasts within the visual language of gestural painting.