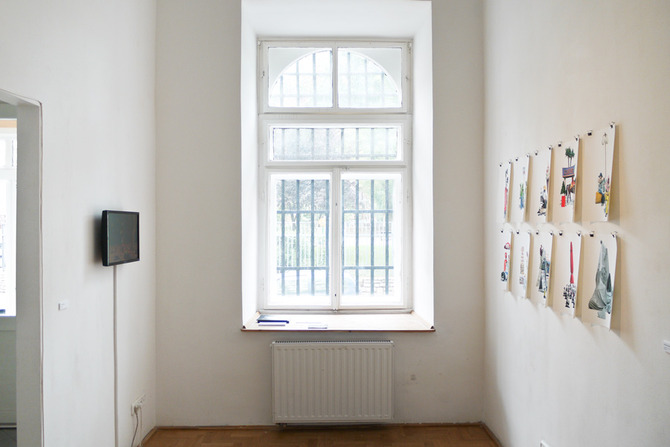 “Free Fall” focuses on the dialectic between repetitive scenarios, defined by restrictive forces, systems or rules, and the creation of unique, game-changing patterns.

The artworks on display reveal loops of human actions and cognitive processes. Most of the works contain a feeling of vanitas, expressed in different contexts, like in the macroeconomic, our in intim domestic sphere as well as in our own thoughts. At any time we seem to be affected by various, from us independently working forces – we are doomed to endless repetition.

Further more the exhibition title “Free Fall” is in contrast to its ostensible meaning: In the free fall, there is no actual freedom at all, since everything is controlled by an invisible force. The artists sensibilise us to the existence of these unseen powers. Their artworks unveil different latent forces and this revealing act gives them a constructive, mobilizing energy.

The exhibition is part of Chimera-Project’s InterArt program, which aims to build bilateral exchange – this time with focus on Switzerland. Peter Aerschmann, Swiss artist gets an extensive introduction for the Budapest audience throughout the exhibition “Free fall” and Chimera-Project’s screening at the upcoming Crosstalk Video Art Festival. On the other side of the exchange, in October 2014 Gábor Koós will be artist in residence in Switzerland, at the Berne based institution “PROGR”, followed by another Swiss exhibition in Budapest planned for early 2015.