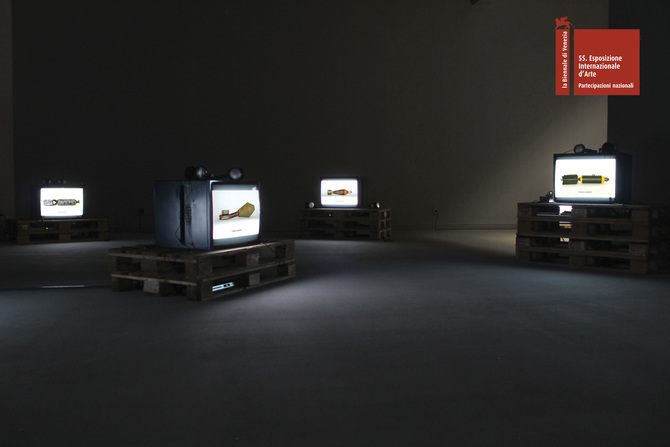 55th Venice Art Biennale (Hungarian Pavilion) // bewildered – terrified – threatened // Each bomb has its own story, which is essentially one of two kinds. Bombs may explode and thus fulfill their role as objects made specifically for the purpose of destruction, and then enter history books and the personal histories that families maintain. Zsolt Asztalos in his turn looks into the other possible story in an installation he has prepared for the 55th International Art Exhibition in Venice: the story of the malfunctioning device (unexploded bomb) as it leaves behind its original function, assumes a life of its own, starts writing a narrative, becoming a director of our lives through the contingency it introduces. It stays with us humans as it generates and symbolizes conflicts among us. It is an object of mercy, a threat, or a memorial. In Asztalos’s video installation, unexploded bombs are revealed to have several functions and fields of interpretation. Floating in an indeterminable space, the bombs seem to exist, thanks to the sound effects that surround them, in a matrix defined by the continuous interaction of the past and the recent past, the present and the future. Zsolt Asztalos’s objets trouvés are multiple representations of conflict situations, open to simultaneous interpretations on personal, local, regional and global levels. This brave and thought-provoking installation belongs to the praxis of visual art that has been instrumental, through research and exhibition, in processing the brutal traumas of the late 20th and 21st centuries.