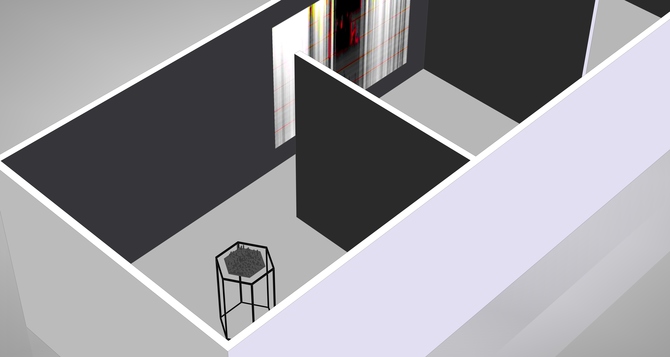 The show revolves around the human behavior of continuously re-conceptualizing its natural environment by analyzing, abstracting and rebuilding the perceptible reality. Martinkó's works explore the uniqueness of the human drive to be separated from nature and build abstract structures. The exhibited works use artificial noises, both audible and visible as major elements, which being unnatural constructions themselves reflect on the way how people design their own surroundings and highlights the contradictory values attached to our way of living. Starting off with a photograph revealing the absurdity of the urban combination of natural and artificial, the show puts the viewer into the position of questioning the boundaries between real vs. staged, normal vs. bizarre, nature vs. created environment. Leading to the pure embodiment of abstract existence, the route of the exhibition is paved with videos depicting seemingly normal, mundane places such as a dam destroyed by digital noise, that is human intervention. By the time the idea of a balanced co-existence of natural and built surroundings has been entirely disrupted by the glitch videos and the staged photograph, the visitor reaches a clean, geometrical, overwhelmingly abstract city generated by audio noise. Industrial sound is also installed in this space on speakers. The ideal exhibition space is long and narrow, strengthening the feeling of getting further and further away from reality and approaching the state of pure abstraction. Therefore, walking through the show resembles a religious or metaphysical experience, being in search of an idea, while the space is also a disturbing environment, which does not let the visitor relax, but continuously stimulates them to question and re-define their place in the ecosystem. In an ideal installation the final 3D print, which was made from industrial noise is placed in a square shaped area alone, lit as if on stage. The whole route is a dim, dark path, which reaches its peak at the final black box with the sculpture of a city in the middle as arranged in an altar. As visitors get closer to the sculpture through the path the industrial noise grow louder and louder. The phases of leaving reality behind and the darkening environment with the disturbing noises as well as the intended visual errors gradually lead to questions on the way of human living and therefore on the role of human beings in the system of nature on Earth. The pieces on show focus on people’s intention on dominating nature in creating new, abstract constructions as their natural habitat and in intervening into how nature functions in order to make it serve humans’ purposes. The above mentioned aim of the exhibition, that is to create an almost immersive space that provides an alienating and at the same time spiritual experience to strengthen the tension of the contradictions that the artworks demonstrate, might be reached in various installations. The previously described version is the ideal setting, but the overall structure of the show can be built in multiple types of spaces as long as it is possible to darken the room slightly to ensure that the videos work properly. (Tünde Török, curator)