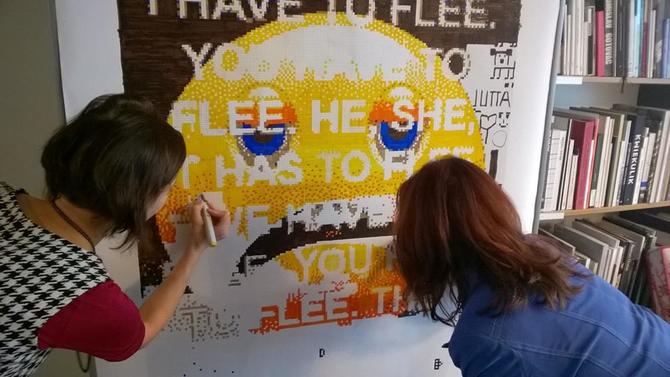 The Human Printer is a post-digital printing installation, based on gamification, where human users turn themselves into a printer. Likeprint is a crowdsourced way of image processing, where visitors became the creators, without knowing what picture they create using like-stamps. Post-digital printing is an image-making process that – by the help of digital image-calculation – aims to turn human beings into mechanical image creators. In this sense the human printer is a disidentification of academic painting and drawing strategies, for creating a field of unconscious image-creation. The Human Printer is a non-age-, non-gender-, non-identity specific setting, where users do not overview the whole process (or see what the final result is), while they can not fail either: individual fails disappear within the thousands pixels printed. Therefore it is a playground and an experience to show what collective effort can reveal. Users got involved through their curiosity, because everybody wants to see the hidden image, although nobody can see it until it is finished. This voyeurism generates a community of participating people with an extra creation layer. The technical principle of the human printing procedure is the mixture of calculated images and artistic realization. The digital image is turned into numbers by the grayscale values of its pixels, and then it is turned into a physical artefact by human participants. It can be of various sizes and various realization. Through the forecast mentoring project I want to develop new ways of human printing with focusing on the collective unconsciousness. The final result will be a print revealing an image of collective effort. The inner/real structure of the image is not anatomically described anymore: it is described by numbers. The main properties of the images, such as perspective, lines, colors, are no longer assings the position of the viewer, as it is already fixed in the resolution of the images. You don’t know anymore, what you’re drawing: it is coded into a set of numbers.