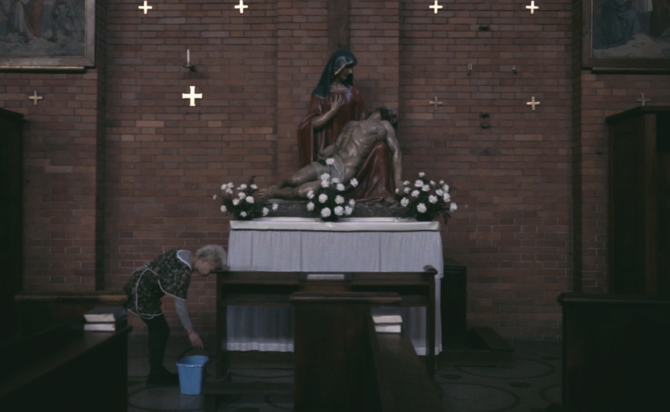 Cyborg and the Church (in collaboration with Anna Remešová)

Magic in the time of economic boom Is the environmental challenge of speculation and virtual transactions negligible? What principles make financial decisions complete and did the sphere of influence and financial flow not become spontaneous structures? In relation to contracts such as the The Transatlantic Trade and Investment Partnership (TTIP), The Comprehensive Economic and Trade Agreement (CETA) with Canada or the Trade in Services Agreement (TiSA), the debate over the role of multinational corporations has been revived. Their perennial efforts to get additional tools to increase their profits put in juxtaposition the uncontrolled moloch and the orphaned human body, that will bear the (visibly and intrinsically) mighty impacts of this power in the upcoming period. The continuous liberalization of the global market has different forms, some of which can alternatively be transferred to larger or smaller groups. One as an individual always becomes a consumer of influences, which are in the time of fluid economy beyond his control and thus deprive him of his or her liberty. The existing bureaucracy and left-wing political debate do not have the tools to be able to compete with the private sector and despite the fact that there are measures (trying to hold multinational corporation liable for damages, which the have caused), it turns out that it's only an abstracted mouse scuttling behind the Walt Disney Pus in Boots. It is therefore appropriate to ask what is the alternative or to start looking for a new /strong and stable/ exchange system that will be able to fully replace and overcome the current "liberty". But how can we claim equality, and can we even convince the fluid financial sector to change when the banks have long ago stopped lowering and raising interest rates according to the poverty of the poorest? The driving force here is not the alarming median, but the demand which has turned the yawning scissors (between rich and poor) in the globalized world into a meat mallet, and on its handle sits the sacred 10%. Unnameable premises of holding companies and endless speculation with real estate complete the vision of wealth while State debts are twice as high as they were a decade ago, and the ecological image is a disaster. One of the powerful moving economic forces is visual presentation mediated by social networks. A video image should also be the overall output of this project. The planned video-narrative Magic in times of economic boom represents the very concept of magic as the power to create something out of nothing, as a collective interconnection, ritual or healing. It offers magic as a possible synonym for invisible flows and transactions not based on exact principles and predictable behavior. The script will be about the world of spells and magic, locked behind the gates of banking acquisitions and funds where the rituals taking place there are too close to nature, emotions and affections. The form of the video is based on visual approaches composed of 3D and 2D animation technologies, real and studio shots and classic "handmade" techniques (painting, drawing, sculpture). In the video spoken words are replaced by original songs and their singing and rapping performers. The aim of such visual presentation is primarily communication with the audience different, however, from classic concept of canonical narratives, visual constituents and language. Cyborg and the Church (colaborated with Anna Remešová) The video with working titled "Cyborg and the Church" combines contemporary criticism of religion with feminist theory, through a specific micro-story of a woman who cares about the interior of the Catholic church. The story starts with a glimpse of the inner scene in which the priest stands authoritarian over the people and preaches the Babylonian tower. The key story of confusing languages ​​and peoples is reminiscent of the beginnings of a world dominated by chaos - and this same chaos becomes the central theme of the video. While a woman in a desolate space cares about a church, the architecture itself begins to speak to the woman and dialogue takes place between them. Digitally modified architectural elements begin to complement the woman's activity and join in a common moment of care. At the moment when both realize their inferior position in the church, chaos will be in the whole area, the building itself will collapse and start spinning in uncontrolled movements. Chaos, the non-order marks the transformation of the state of the art. The video works with the theoretical background of contemporary feminist thinking, specifically with reference to cyber-feminism, which emerged in the early 1990s by the work of British feminist and cyberculture theorist Sadie Plant. For cyber-feminism, modern technology and the resulting logical struggle against the classical dichotomy of nature / technology or natural / artificial, become a key point, while in the times of strongly patriarchal dominance, the woman in most cases is attributed to nature and men by technology and technological advancement. The video cuts off these dichotomies, as is shown by its gradually decaying form. Communication between architecture and protagonist does not take place at the "human" level, but is determined by the relationship of their "technological" interiors. Just as wires, bricks and substations fill the walls of buildings, the organs of women are similarly structured. According to the theory of the VNS Matrix cyberfeminist group, for example, the female genitals can be labeled as technology because their functioning and perception influence external factors and is therefore created and used as a tool. Cyber-feminism, therefore, is based on the experience of a woman and her body, but it does not socialize it, but describes its active interaction.