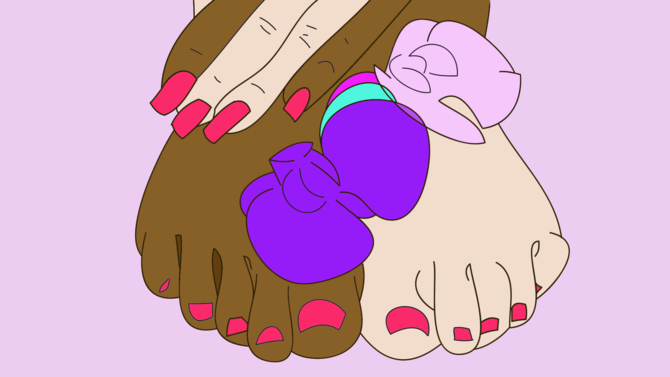 The Polyamory Magic Economics Project is based on studying picture composition in relation to social non-hierarchical bonds. The project's subject matter is mapping out and covering as many communication processes connected specifically to care and polyamory which are subject to certain mutually defined and organic rules. The subject is based on artistic and theoretical discussions, in which works with art are seen as systems of relationships and formulas within contemporary social arrangements. The aim of the project is subsequent use of explored structures in the visual construction of a work of art and in building its narrative. /Project characteristics/ Is the structure in which we function within the framework of the society predefined into such an extent that it is really impossible to break free from it? The sphere of political life increasingly penetrates from the public to the intimate/private. Therefore the ever more present demand for men taking care of children/household initiates the actions of legislative bodies, change of range of goods on offer or the face of advertising in general. But how can such a system based on submissiveness and dominance react when one household is taken care of by three, four or more partners who all partake in one relationship? Adam Sears describes in his article Body Politics naming (moods, physical conditions or interests) as the first condition for sale. The word Magic on the other hand works on its completely blurred meaning, which is pretty good as selling article and also as representation of an unimaginable meaning. It is taken ( gradually and historically shielded) over from natural rituals as well as from exproprietary techniques of land appropriation or explaining regard for other than stereotypical sexual orientation. The Polyamory Magic Economics Project works on the idea of breaking the overall substance of heteronormative perception and the language of current organization. It is mainly concerned with visual, theoretical and experience based research regarding the functioning of polyamorous relationships, which are best recognized within families or activist collectives. It is a complicated process based on communication, mutual understanding and care which serves as a strong invisible network. Such relationships are defined only on the basis of own decisions of its members and are proves of consistent reevaluation of partial decisions connected to the emotions of all involved. Therefore it is a set of infinitely generated and rearranged rules and thus connected experience. The polyamorous relationship contains within itself ability to adapt to the most unlikely external conditions, to end itself or any other reverse twist, while the sense of equality, mutual care and tolerance continue to represent the most important common denominator of all processes and developments. The use of these processes in the sphere of economic influence or functioning of institutions and companies is actually a use of wider possibilities of social reproduction to the work sphere itself, with its domain being mainly competitiveness and domination. This request appears as a possible answer to the question of crossing a precarious structure. A set of such bindings and rules can then be transferred to other spheres in its basic structure. A producer of images can for instance relate to them in his or her own creativity and forms of image combination or storytelling. Considering that steady rules for composition perception or reading cinematographic language are subject to authoritative rules of visual work with the viewer. The ability to manipulate becomes therefore essential for visual strategies connected to subsequent distribution and thus constituted power. Non-authoritative bindings are serving as an inspirational sources or structures for creating formal stability of an artistic image. Non-hierarchically composed image, even though it offers infinite number of its positions, works basically with transfer of emotions and feelings, which are concentrated and they collapse within it. Visual and narrative work is thus not subject to any expected structure but it works with the sensing devices of the audience and therefore it is well able to transmit information.