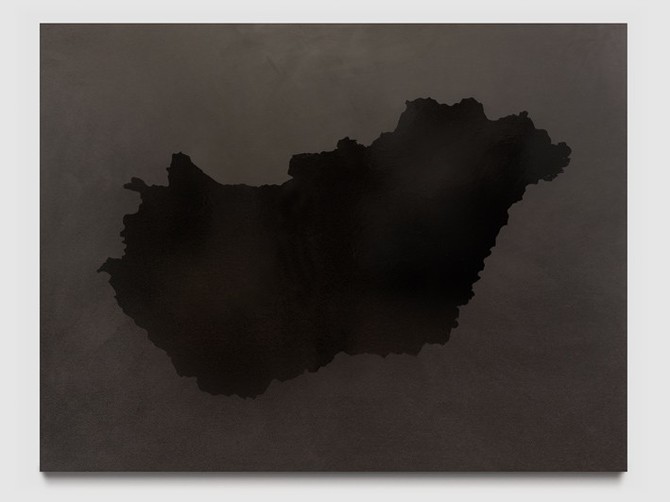 Glossy black enamel paint, or its other name „Blaek” is the main identification element for Lőrinc Borsos, that appears in his/her work right from the start of his/her career. The expression is of an Old English origin, which was used to denote glossy, „good” black, as opposed to a matte, „bad black” called „Swart”*. High gloss black industrial enamel paint has opposing qualities: it absorbs and reflects light at the same time. Which quality prevails over the other depends only on the viewer’s position. According to the intentions of the artist, the medium created by the paint – despite its profanity – can open up mystical dimensions, punching a symbolic wormhole between times and topics, and opposing contents. It covers and depersonalizes; it separates, or eventually, it connects. „I believe in that a plastic, a torn plastic basin is just as sacred as the Vesper star, but salvation cannot be guaranteed in advance. Therefore, if in my glance, or in my perception this is not elemental, then you cannot say anything better about that thing, in fact it must be weighed down. I’d even dare to say it must be ducked under water. So to make plastic even more plastic, and in that very moment it will burst out crying, and in that moment it will emit a scream like martyrs do.” (from a 1979 interview with János Pilinszky, reporter: István Szigeti) Material is hard to control, which envisages a potential for experimentality inside it. Each of the painted surfaces is individual, and react to the smallest changes of the surrounding. It remains flexible even after its drying/fixing, and it dilates or contracts along temperature changes. As to leaving marks on them, they are unprotected against external effects. *Michael Pastoureau: Black: The History of a Color (Princeton 2008)