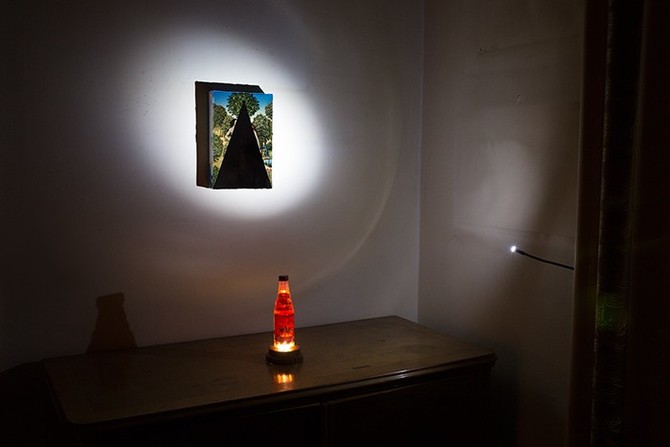 2013-2016, collaborative project, series of events and exhibitions (Latarka Gallery, Karton Gallery, 115-106 Apatment Gallery, Budapest), photos by Miklós Sulyok. Self-crisis as motivation, therapy as method, collaboration as statement. "The paintings created throughout the Self Critical Portrait project (2013-2016) are the work of painter Gábor Szenteleki (author 1), co-authored by curator and art historian Kata Oltai (author 2), and signed by visual artist Lőrinc Borsos (author 3)." It became clear at the start of the project that the tools used for self-scrutiny and self-definition would not only be the ones traditionally used by art history, but also those employed in affiliated disciplines, such as sociology, cultural anthropology or psychology, as well as mechanisms of entirely disassociated fields. Besides the quest for real answers, these inquiries have made it possible to scrutinize ingrained responses, role clichés and methods of resolution. How far does the supposedly omnipotent role of the artist extend; the hallmark and style, as qualities of identification and recognizability (expected even by art trade); the necessary or superfluous, symbiotic or parasitic role of the curator as facilitator or hindrance? Is undertaking a critical condition in a public art scene that prescribes progressiveness equivalent to suicide? Can private life and artist identity be merged? As an artist duo, are they dominated by their female or male identity? Do they have to make a choice as to what kind of dynamic moves this relationship? Is all of this sustainable in a private partnership (marriage)? The participants have considered themselves equal creative partners from the start, their roles put down in a contract, their negotiations logged. With the help of the project as well as psychotherapy, Borsos and Lőrinc have re-examined their relation to the hybrid artist brought to life by the two of them. Szenteleki’s role has been to attempt to visualize the emerging anomalies in painting while reinventing his own pictorial language. The cyclically reconceptualized process has been consolidated through the coordinating and analytical role of the curator.