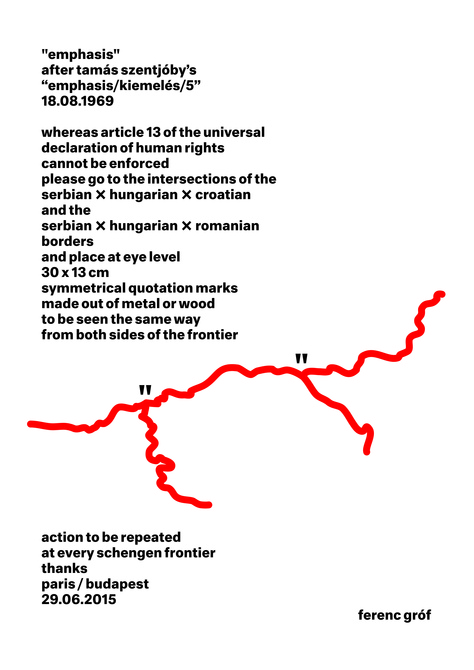 Tamás Szentjóby (or St.Auby or St.Turba) as a Hungarian artist under strict surveillance during the 60s and 70s created his Emphasis 5 piece just a year after the invasion of Czechoslovakia by the Warsaw Pact armies. He was refused to have a passport and he could leave the country only in 1974 to Switzerland where he stayed until the political changes. In his original A4 conceptual piece he asked the reader to go to the triple intersection of the Yugoslavian, Austrian and Hungarian borders and then to the Austrian, Czechoslovakian and Hungarian borders to place quotation marks on this segment of the Iron Courtain. This summer of 2015, more than 25 years after the fall of the Berlin Wall and the Iron Curtain, the government of Hungary decided to build a 175 km long barbed wire wall on the Serbian-Hungarian border. The re-contextualization of the ’69 piece of St.Auby by Ferenc Gróf is a reaction to the more and more militarized tendencies of the EU concerning human migration.