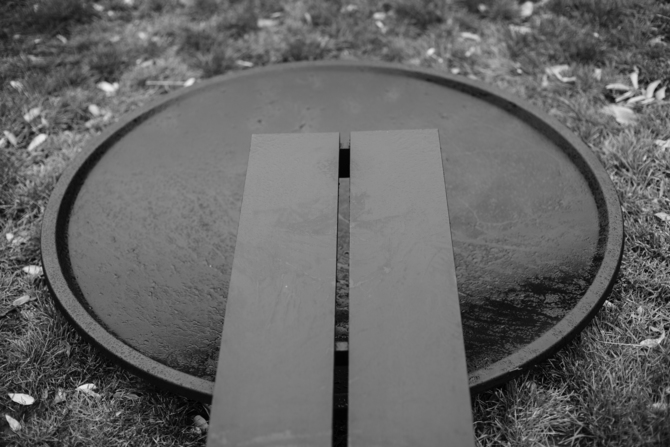 prototype for a monument, 2015 In the frame of the Vanishing points project, curated by Tamás Don. Photo: Zsuzsanna Simon. Klauzál Square was the largest open space inside the Budapest Ghetto. When the ghetto was completely sealed between December, 1944 and January, 1945 the square was utilised as a temporary cemetery. Approximately 3,000 bodies were later moved to the garden of Dohány Street Synagogue and to the cemeteries on Salgótarjáni Street and Kozma Street. As a memorial to Klauzál Square, Ferenc Gróf designed a horizontal acoustic mirror positioned on the ground. Acoustic mirrors were the precursors to radars, these passive devices are capable of intensifying and concentrating soundwaves. The large, vertically installed objects were used to predict incoming enemy aircrafts. Visitors of the memorial can lay down inside the hollow surface of the horizontal acoustic mirror, listening to the sounds of the city reflected by the sky. The visitor is positioned directly in front of the acoustic mirror, making the noise of the nearby playground and the traffic seem distant. The eyes are directed towards the sky.