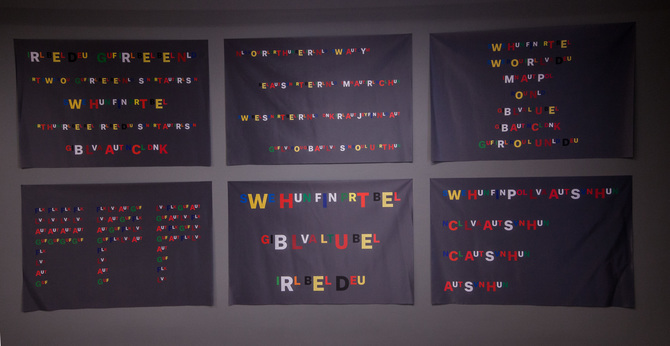 The Flag alphabet is a writing system based on the three-letter codes of EU member states and their dependencies as published by the International Organization for Standardization. One of the letters of the countries is bigger, while the two others in the three-letter codes are in superscript. For exemple, the letter A is based on the code of Austria, AUT, where the capital A is highlighted and the U and the T are in superscript. The corresponding national colors were used for each selected ISO code. The Flag alphabet writing system in itself emphasizes the supremacy of the Latin alphabet, because the so-called, very ideological, “neo-Kultturkampf” concept of the “clash of the civilizations” can be deconstructed by following the rupture of scripts: Latin vs Cyrillic, vs Arabic, vs Any Other Barbarian Scribble. The series based on the Flag alphabet presented below reflects more closely the migrants’ routes towards Western Europe and the Syrian crisis, constructed as a fragmentary, saccadic textual pattern made out of “naional characters”, such as a Schengen script, written in Frontex language. This writing system was coined for the Cold Wall exhibition series (Budapest, 2015; Novi Sad, 2016) and was presented as an installation at the Universal Hospitality exhibition (Alte Post, Vienna, 2016).