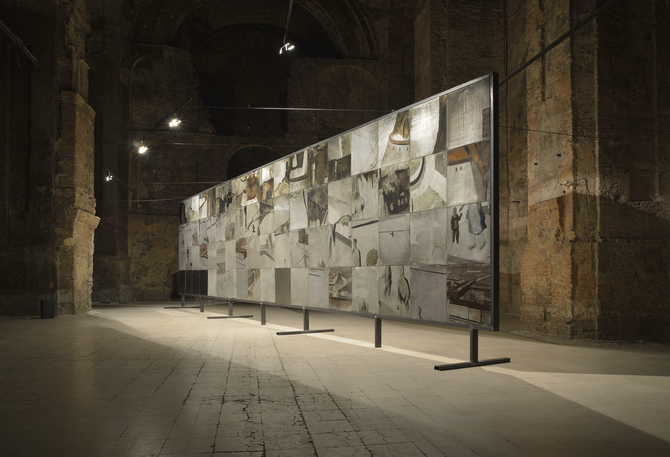 The exhibition is organised around two art pieces — a large panel painting having lurked in a repository for more than 50 years and a novel published more than fifty years ago —, both related to the years following the Hungarian Revolution and Freedom Fight of 1956. The fate of the two artists — Aurél Bernáth, a well-known painter and Tibor Déry, one of the most widely read novelists of the period — had been interlocked with the history of 20th century Hungary. Their lives were similar in many respects: they both came from upper class families; both were attracted by the activist avant-garde of Lajos Kassák; after WWII they earned high positions and as prominent artists soon experienced both the pull and the push of the politics. Their friendship went back to the 1920s and remained untouched by the disputes during the ‘50s. In August 1956 they were both entertained by a mutual friend, Vilmos Szilasi, in his house in Brissago, Switzerland, however their paths departed within a few months. Their life situations were never more different than in 1958: Déry was spending his sentence for participating in the Revolution, while Bernáth was shielding his students at the College of Fine Arts at the same time planning to reproduce works on art theory by western writers. Déry was writing his dystopic novel G. A. úr X-ben (‘Mr. A. G. in X’) — originally meant to be entitled ‘A Clock without Hands’ — in the prison hospital in a booklet on his lap, having no hope whatever to get his work published in Hungary. At the same time Bernáth was working on a huge and representative view of Budapest to decorate the wall of the Hungarian pavilion at the Brussels World’s Fair. While one of them was depicting claustrophobia, the other was painting a panel picture to show the Kádár era Hungary to the free world. The first piece of art displays dust, ruins and unbearable time, the other work was planned by its artist to reflect the blue skies of Brussels for several seasons. Déry’s novel was published in 1964 while Bernáth’s painting was confined to a repository; however the friendship of the two artists remained unbroken. The visitor book of Aurél Bernáth’s exhibition in 1972 contains some appreciative lines by János Kádár under which Tibor Déry entered his signature. Aurél Bernáth: View of Budapest, 1958 18 x 4,6 m, painting on 66 aluminium-sheets, fixed on wooden frame. Kiscelli Museum – Municipal Gallery, Budapest Tibor Déry: Mr. A. G. in X, first edition, 1964 The year 1958 — when looked back from our time — came to designate primarily a tragic moment of Hungarian history, the execution of Imre Nagy and his fellow martyrs. However it was also the time when Hungary first opened to the West after the Revolution. The participation at international events abroad was an attempt to legitimate the Kádár system. Besides national traditions the Brussels World’s Fair — prominently presented in the Hungarian press as well — accentuated modernity and contemporary design not only in the pavilion design but in the selection of artworks as well. As in 1937 in Paris, an important aspect of the Hungarian presentation in Brussels was to show Budapest under restoration and rebuilding. Aurél Bernáth created a huge panel painting for the Brussels World’s Fair pavilion painted on aluminium sheets fixed on a wooden structure: a panorama of Budapest from the Gellért Hill. Tradition meets modernity in his picture: aluminium was considered at that time the material of ‘the Hungarian future’ while the skyline was the old one; the castle bastions, the reconstructed bridges and the factory buildings in the distance are represented side by side, looking equally important. The starting point and benchmark of Tibor Déry’s novel written at the same time is also Budapest, while the imaginary city of X resembles Moscow of the 1920s the best. The parallels and contrasts within these two works are now highlighted by a contemporary artist in the Church space of Museum Kiscell. Ferenc Gróf as a member of the Société Réaliste group has created a peculiar toolkit from linguistic and typographic elements, statistics and cartographic signs to examine social processes and to exhibit correlations between past and present. He preserved this approach and vision even after the dissolution of the artist group, however his focus turned towards earlier artworks and the intersection of the history of Hungarian fine arts and Hungarian literature. Re-interpreting earlier artworks has always been used as an artistic vehicle but the mid-20th century saw the notion of détournement (‘rerouting, hijacking’) emerge, while at the end of the century artistic strategies of ‘appropriation’ and ‘intervention’ brought novelty in this respect. Ferenc Gróf picks one element from a museum collection and another from literary history and re-interprets them through his individual approach and toolkit. Bernáth’s panel painting will be presented to the public for the first time after the 1958 World’s Fair. The text and images of Déry’s novel — though it was republished just a few years ago — were not much quoted during the past decades. Gróf puts the layers of meaning of both works onto one another to invite the public to recognise and reread the past. A subjective selection from the text of the novel ‘Mr. A. G in X’ appears in the exhibition space while the panels of Aurél Bernáth’s painting are rearranged according to an algorithm that overwrites the artwork’s original logic. The panel painting originally decorating the outside of a pavilion now will be presented indoors, while the book — closed, practically un-presentable in an exhibition — will be opened up through a selection of passages. Historic documents, newsreel excerpts, audio recordings give shades to the picture of the period and the context of the two artworks. Ferenc Gróf builds his analysis upon the idea that there is no such thing as a unique and obligate image of the past, or a singular narrative of history; past exists through after-constructions. Bernáth’s painting will be reconstructed for the last two weeks of the exhibition; its panels will be rearranged according to the original logic. József Mélyi