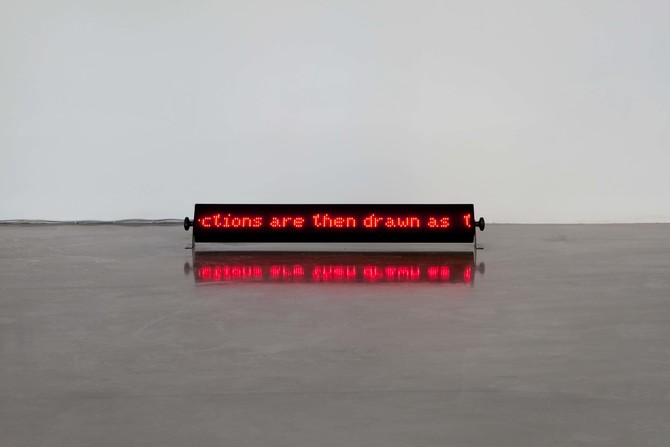 Turing test, 1950 "Turing test is a test of machine capability to exhibit intelligent behavior similar to human behavior or indistinguishable to human behavior . In the original experiment the human judge is entering into a natural language conversation with a human and a made machine as to generate activity that is indistinguishable from human performance. The test participants are divided. If the judge cannot certainly recognize human from the machine that means that the machine has successfully passed the test. " (Alan Turing: Computing Machinery and Intelligence, Mind LIX / 236, p 433-460.) Jana Bernartová‘s exhibition is the result of exploratory art project called Generating of texts of generative art exploring possibilities of artificial intelligence. Minimalist installation consists of austere led diode display devices, timer and computer. The core of the installation is immaterial in terms of the software. Installation shows not only the passing time but also the phenomenon of generative art. Based on careful programming, the author lets the software generate a database of texts on generative art which is enclosed in a safe space. Testing the topic in this space can be done by using its own tools and language. Detaching from the human factor in the research process, the key issues are coming up to the surface. It deals with the fact of the strongest motive imperfection of a human who is unable to accommodate passing of data in their complexity. Artificial intelligence is replacing writers and their ideas. The format of developed phrases is linguistically correct yet the content often lacks the explicit meaning.