BY ASHLEE B CONERY

And the Public Choice Prize goes to... Dariusz Gwizdala from Budapest, Hungary.

There was great public voting activity with altogether 9098 visits and 1098 votes. Gwizdala received the most votes and therefore is winner of the Chimera Public Choice Prize – Congratulations! His prize is this exclusive coverage on Works.io with a portfolio review by Ashlee Conery, Curator and Co-Founder 7x8 Kuratoren. 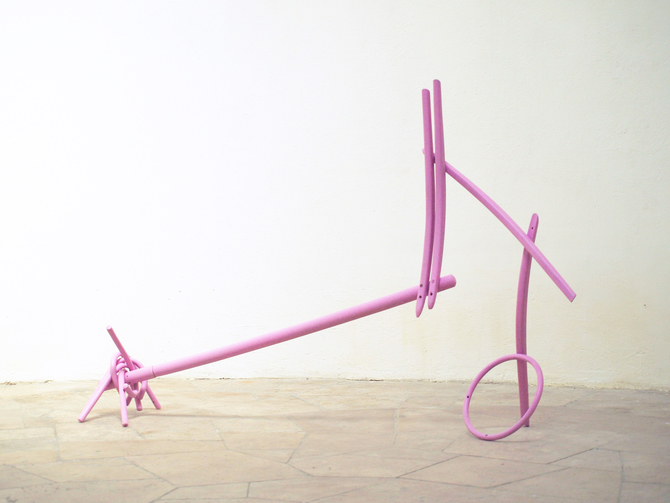 Dáriusz Gwizdala, recipient of the Chimera Public Choice Award, is currently studying sculpture at the Hungarian University of Fine Art. Graduating in 2015, he has already exhibited at Babits Art Center, Müvelödési Szint and Fuga. Át, an exhibition at Fuga in 2014, paired Gwizdala’s work Hcair with that of architects Bene Tamás and Máté Tamás who recorded their ‘action’ involving a red chair secured to drifting ice floating down the Danube. Hcair, 2011, shows Gwizdala taking apart and piecing back together a yellow chair. He imposed two rules on his process: use all the parts; and only original connecting points. Hcair spun into The Abstract Series in which Gwizdala describes his work as ‘opening’ utilitarian objects. He does not consider these abstract sculptures as the sole outcome of his creative license, but the revealing of art that already exists within otherwise functional household furnishings.

Since 2011 Gwizdala has ‘opened’ ten objects including a kitchen knife, bicycle, several chairs and coat racks. Through The Abstract Series, he means only to explore how these common finds share an aesthetic language that allows them to be both purposeful and artful. The notion of uncovering art buried within a material, dates back to Michelangelo who believed he only uncovered the sculpture that lived within a block of marble.

It is interesting to see this process in the context of ready-made objects. Gwizdala separates himself from the likes of Duchamp in this respect. Duchamp primarily displaced ready-mades out of common context and into art, whereas Gwizdala is predominantly interested in whether “trivial objects” may move from symmetrically closed to abstractly opened without dissolving.