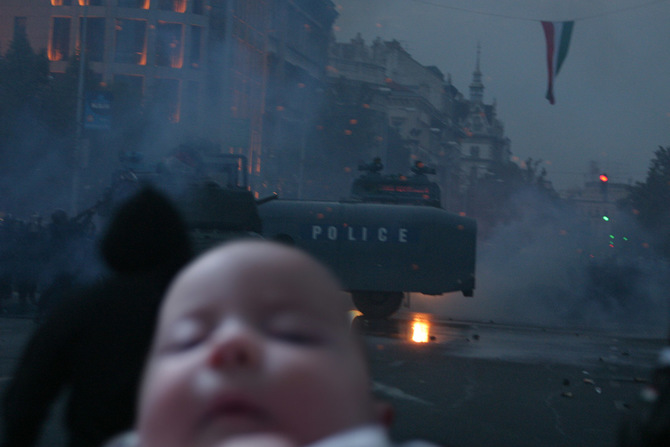 Formalities is a retroactive photo collection. The installation works with photos as a stock photo website, shows photographs and their keywords at the same time. The keywords describe and also organize the collection of images. The keyword selected by the viewer generates random series of pictures. The keywords or categories like discrimination, leftover, support, gentrification or democracy represent a totality of the 21st-century everyday experience in Eastern Europe. Twenty-five years have passed since the expression ‘Eastern Bloc’ became obsolete With the fall of the Iron Curtain in 1989, the catch-all term ‘Eastern Europe’ was created to describe and under- stand a region that has a wide diversity of geopolitical, geographical, cultural, historical and socio- economic backgrounds. Since then, these relatively small countries have entered into a transition- al process, from planned to freemarket economy, from Soviet type socialism to liberal democracy. This evolution is neither finished nor has succeeded. Twenty-five years ago it started with a great fascination towards the other. On one hand the West saw new opportunities for the revival of democracy, new investment possibilities and cheap but well-educated labour. On the other hand the East was already looking forward to experience the Western standard of living and the idealised benefits of capitalism. However today, enthusiasm has wared and disenchantment is perceptible. Eastern Europeans feel an enormous discontent with their everyday life conditions. The social gap is expanding, directly leading to elected autoc- racies, where nationalist values and ideologies are trumped by the ‘blame-the-other’ joker. While countries and their citizens are indebted to the rules of capitalism, nostalgia for the „secured” socialist time is increasing. As deprivation grows, intolerance towards the other and the difference explodes. Based on this, ‘Eastern Europe’ does exist. Its nations ceased to exist and are now going through similar experiences and influences, ideologies and pressures. The project focuses on the last two dominations, the Soviet communist-socialist past and the globalised capitalist present. The se- lected snapshots point towards the key characteristics of contemporary Eastern Europe: the con- tinuous crisis of personal, political and cultural values and the implosion of beliefs and principles in private and public contexts. The works refer to the multiple aspects of life, in cities or countryside, in private flats and common grounds, from schools to professional situations.