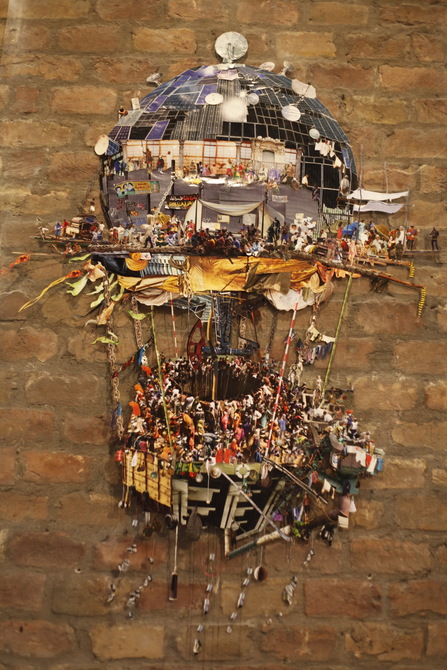 This version of the installation Babel is based on the 2.0, but it is upgraded: it became three-dimensional from flat. It won’t be higher than the latest one, but it will be wider, much more detailed and elaborated. The major piece of the proposed exhibition is the Babel 3.0 recycled installation. For me the most important part of the biblical tower is that it’s putting an analogy between Adam and Noah: the tower of Babel has been built by the family of Noah, who are direct descendants of Adam, and the tower has similar symbols as the Tree of Life. Building up the Tower, with their and their unstoppable ambitious creating acts mankind have achieved God’s anger who in respond confused their languages - just as he punished Adam and Eve after the fall. In the world I created confused people meet again and thrown back on each other they live in a futuristic utopia adapted to the changed circumstances. The tangled yet founded common language manifests in tags, graffitis and doodling. I apply for the Leopold Bloom Art Award, because I am hugely interested in the symptoms of global society, therefore I would like to present my work of art to international public. Also my artworks reflects on the variegation of the world and the diversity of nations and languages. Beyond that, my technique, recycling, and the topic, cities in the future hopefully be able to convey the importance of eco problems, which is the burning question of our times.