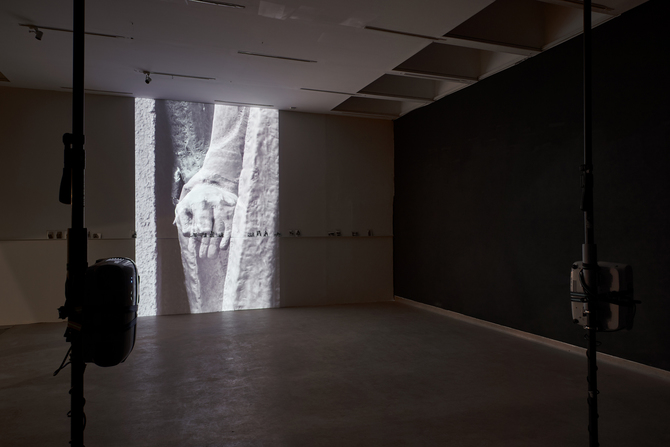 "Two hands of a statue; in two kinds of position. The left clanched in fist, the right palm outstretched." The work 'Offset' focuses on the statue of Lenin erected in 1970 on the main square of Dunaújváros, the new industrial city, built from 1949. The bronze sculpture formed by István Kiss - one of the most popular and occupied sculptor of the era - was dismantled 20 years after its unveiling in April 1990. For a long time in the 90's it was lying covered at the site of the city management company till 2003, when it was re-erected under the arches of the local museum. It is still there, in the neighborhood of the locally-found Roman stone fragments. This statue, as many of the similar examples from the main squares of the former Soviet cities, was erected as an indispensable representation of the dominant ideology. It confidently and steadfastly stood on a pedestal at the center of the city, elevated a few meters above the people's perspective to validate an ideology-based system (in this case the concept of an entire city). However, with historical insight, this confidence could be reappraised. If we look only at the history of the development of the city, we find a more hesitant and self-contradictory system behind the many unrealized, failed or unfinished urban plans. With the final days of the soviet regime, the stability of the statue had also been questioned. In April 1990 the participators of its demolition gave the final answer for it. The different layers of images and their relationship thus reflect the dilemma of ideological-based establishments from the aspect of relationship between the dominant power and the individual.