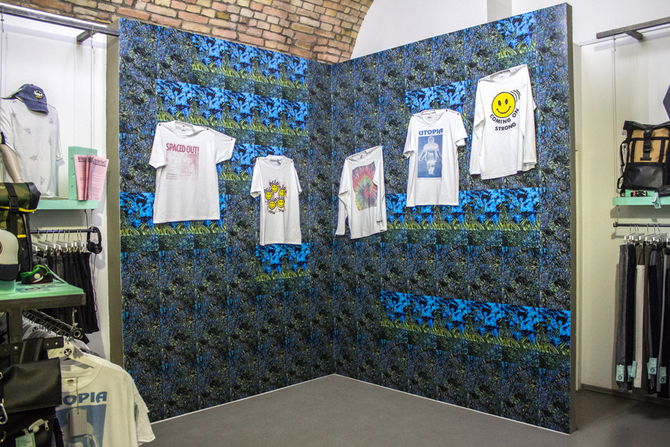 An Out of this World Event II.

Solo show at LLPlatform, Budapest, 2018 / The works that have been made in 2018 are characterized by the errors of file conversion, as well as by the tension between digital and printed images and the ethnographic submersion into subcultures and DIY scenes. These artworks evoke the nostalgia for lost futures and the atmosphere of escapisms from the polished consumer realities. These tendencies are being accentuated by the aesthetics of glitches and the sensibility to "rustic" material surfaces. Following the exhibition at D21 in Leipzig, the installation entitled "An Out of this World Event​ II." aims to continue the media archeological exploration of utopic events of the early '90s. The motifs that have been appropriated and edited with slight gestures from the internet appear on the prints of a special T-shirt edtion as significant artefacts of rave cultures. Besides the installation that merges into the consumerist environment of Lollipop Factory Budapest as a display, the printed artworks and a sound installation recall the spirit of the predigital cultural era. / Extra thanks for the acid house after party to Saint Leidal The 2nd, Gördön and Új Bála. /// Zsolt Miklósvölgyi: OTHERWORLDLY EUPHORIAS --- > A couple years ago, I was attending a Oneohtrix Point Never gig, when I realized the following: First of all, you have to imagine the space I was in, a cathedral made out of concrete, with a high ceiling, transformed from an industrial space. The view was dominated by two brutalist-looking, almost military-style speakers and two huge, high-res flat screens, hung vertically. The two bright screens were slightly angled towards the audience, and they were showing alternating, disturbing images at a nerve-racking pace and rhythm. At one point, however, I became aware that the most unsettling feature of the visuals isn't the image content, the speed of the cuts or the rhythm of the video, but the technology that is displaying them -- the otherworldly colours of the screen, the almost aggressive brightness levels and the resolution so high that the sharpness almost burns out your eyes. The total emotional invasion is performed by two techno-spiritual totems filled with light-emitting diodes, while in the meantime, the speakers are using an archaeological effect that colours the euphoria of trance music from the 90's to a darker tone. One can't help but feel trapped inside of an out-of-tune present, in which the chimaeras of the recent past and not so far future pass through each other, in order to together create the time-dimension of constant post- and pre-state. We can safely say that the recent exhibition of Mark Fridvalszki aims to explore this peculiar time-paradox, the artist playing a role of the media archaeologist of this clearly specified era and geographical zone. A common topic of his oeuvre, he points out how contemporary culture is torn between the never realised, past visions of the future and the constantly tapering horizons of utopistic opportunities/thoughts. We shouldn't mistake this for a nostalgic, reactionary act, which is trying to navigate us among the ruins of our present to take us back to some sort of past age; nor is Fridvalszki providing obvious directions to escape these ruins as a reassurance. Namely, the features of his characteristic nostalgo-futuristic aesthetics are vectors of desire or pursuit, which somehow lack direction. We feel that they are aimed somewhere, but we cannot be sure how and where to follow them. This is not a downfall of the works, neither an outstanding feature, it is simply a notion of the unique aesthetic character they represent. This time it seems like we can clearly identify the aura of a specific age and its cultural spheres through the installation. The era and location are clearly set -- the euphoric optimism of the '90s, primarily its representation in Eastern-Europe as it was regaining consciousness after the fall of the Iron Curtain. The territories of counter-culture in arts and media established during the times of dictatorship experienced restructuring on a regional scale, which resulted in new forms of community-building and DIY movements in the post-soviet states. Of course, it is only the irony of history that the techno and trance energies creating cultural escape routes from the reality of late capitalism on the Western side of the former Iron Curtain had their moment coinciding with the euphoria of the system change and the promise of a free market economy in our region. The exhibition sees these processes to be interconnected with the formation of the electronic music scene and the experiments with cultural methods in order to enhance empathy among others. Digital technologies, software and printing got more and more accessible to wider audiences and became the norm. These notions all together created the synthetic utopias of the '90s, visual- and sound-scapes bursting with colour and optimism. The visuals of the installation on view might appear to build on the aesthetics of this defining experience of an era, but I would argue they foreshadow the aggressive exploitation of nature that is necessary for the material requirements of digital technologies. Where are the borders for the euphorias of this world? / (Photos: László Kun)