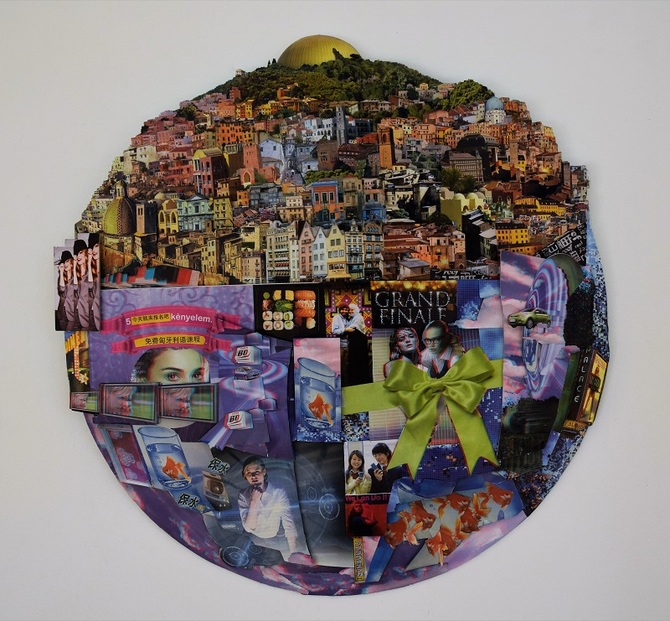 NEW EDEN, Gábor KEREKES' solo show, is the recent chapter of his well-known Future City series started in the second half of the 2000s. The title piece, belonging also to the series of utopian city-collages created from details of fashion magazines, flyers and cutouts of other printed advertising materials, compresses a new vision of the future based on contradictions. Pieced together from photoshopped exotics of the travel agencies, NEW EDEN evokes the customized experience of the unique spirit of travelling. The oasis-like artificial reality created by the artist gives at once a very strange and familiar impression. This ambivalent feeling is achieved by the accumulation, repetition and re-organization of the well-known fragments of our everyday life. Uniting the emblematic motifs of our advertising driven visual culture into artworks irrevocably reveals the reality rooted, yet fictional character of utopias. The precisely compiled collages based on the logic of the geographically ignorant internet database emphasize the precision craftsmanship. The artworks modelling futuristic high-tech cities are built of promotion trash. While the recycling artistic method, in contradiction with the logic of mass-production, underlines the principal of sustainability, the salvaged motifs depict the peak of postmodern architecture. Building them of the actual waste the future city collages display authentic oriental architectural elements as well as Zaha Hadid Western European iconic buildings and the Sydney Opera House. http://www.viltin.hu/archive/neweden