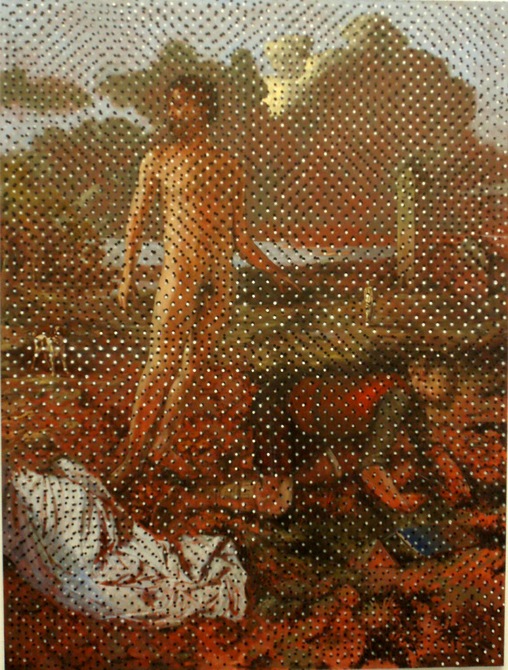 The key concern of my current painting practice is the development of quasi-allegorical paintings. The first stage involves the appropriation of imagery and styles from the baroque, rococo, neo-classical and the early 20th century figurative painting canon and also images sourced from photographic archives, notably August Sander and Bernd and Hilla Becher. The large-scale format and composition of these works is an indirect reference to the history painting genre with its heavily emphasised grandiloquent narrative structure. The secondary stage involves the introduction of optical devices in the form of parallel lines, Ben-day dots or pixel-like patterning. Each of these three graphic elements belongs to a particular visual language (analogue television, photography/ print and computer-based graphics). Their key functions, like the brushstroke, is to play a constituent role in the creation of the illusion of form. The over-painting of the two-dimensional graphic on top of the painterly illusion is an attempt at creating visual interventions that serve to subvert the often didactical reading that traditional figurative painting presents to the viewer. The new mediums leave their traces on the old, creating a palimpsest-like effect; one that symbolizes both the chronology of the development of image-making and the seductive quality of painterly form.