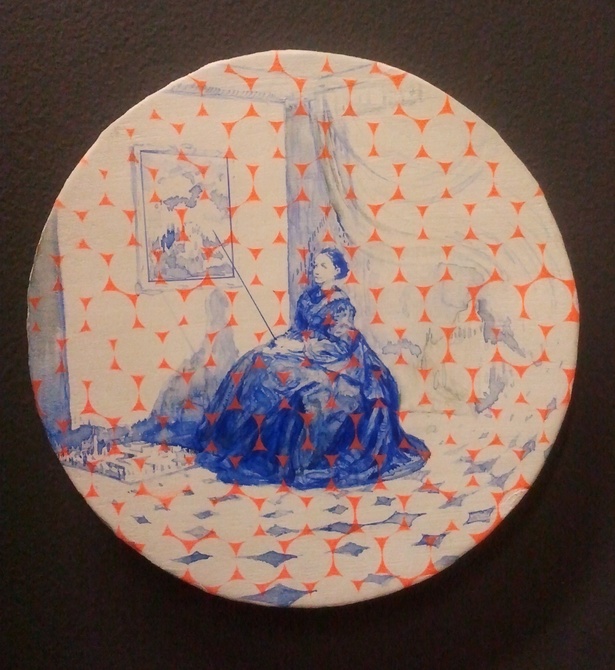 The titles for these works, (Auratype) introduces a curious aspect, referring to the 'aura', as discussed by Walter Benjamin in his seminal essay 'The Work of Art in the Age of Mechanical Reproduction' 1936. Benjamin stated that the mechanical reproducibility of a work of art impacted heavily on the work's 'aura'. The aura being the sense of distance that the viewer experiences when viewing a work of art, leading to the potential for further interpretations of the work's meaning. Benjamin also highlights the original function of the work of art (i.e. magic and ritual through to religious veneration ) these aspects helped to shape the format and content of the works. In each of these pieces, a woman dressed in a stiff crinoline dress holds a lengthy cane gesturing mysteriously, sometimes pointing to a set of miniature architectural models, in others she points to a painting on a wall. They are an oblique reference to the parlour games made fashionable in the 19th century, in particular, the performance of seances or table-tapping and the paraphernalia employed by the quasi-religious illusionists who performed them. In conjunction with this strange subject matter, the circular format alludes to the petri dish as used in scientific laboratories. From this perspective, the subject matter can be regarded as a specimen of a particular taxonomic group. In addition, the introduction of patterned geometric devices refer to today's pixel-based imagery superseding the original printed photograph. The current technological advances in digital photography have rendered today's photos intangible, existing merely as a set of binary numbers, introducing an immaterial aspect to the medium and by implication, the subject matter. The political impact that this has on medium's ability to reliably represent the world of objects is something that cannot be overlooked, as it offers a plethora of opportunities to subvert the photograph's original reading and by so doing, generate new possibilities in areas concerned with the recording and perception of objective reality and personal identity.