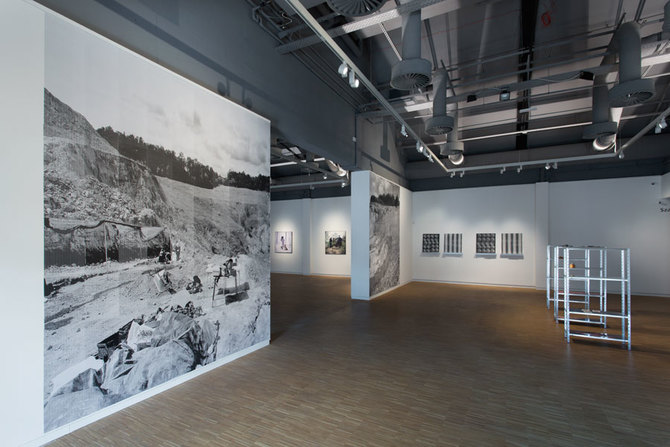 Shortlist at Leopold Bloom Art Award 2017 / New Budapest Gallery / Curator: Krisztián Kukla / Text: Krisztina Hunya /// American land art artist Robert Smithson compared the Earth's strata to an unorganized museum, pointing at the ideological content of geological endeavors. Mark Fridvalszki's Vertical Panorama (A) follows this very thought. His multipart installation zooms in on the township of Iharkút (Veszprém county, Hungary), evoking and drawing parallels between the region's significant bauxite-mining (1979 - 2004/2005) and paleontologist expedition. Bauxite is the main source for aluminium, a symbol of mankind's boundless ambitions; its usage ranges from space exploration, military innovation, and computer technology to home appliances. The Iharkút landscape, turned unpopulated and Mars-like by surface mining, a map transformed by man, becomes the scene of both progress and annihilation. However, in the wall of the pit left behind by the mine, experts of the Department of Palaeontology at ELTE discovered a stratum dating to the Cretaceous. Since 2010, researches have been systematically excavating the remains of the 85-million-years old flora and fauna conserved in the rock, uncovering a "lost world." Through the artistic display of the location's layers, Fridvalszki illustrates the paradox condition also known as "Jurassic Park syndrome" (Svetlana Boym), in which the utopian ambitions represented by the bauxite merge into one another with our curiosity toward ancient periods. Incorporating nostalgic and eerie elements, the installation, a speculative, three-dimensional collage, combines pseudo-scientific abstraction and documentary visual appropriation. / Photos: Tamás G. Juhász, János Iván Kárpáti