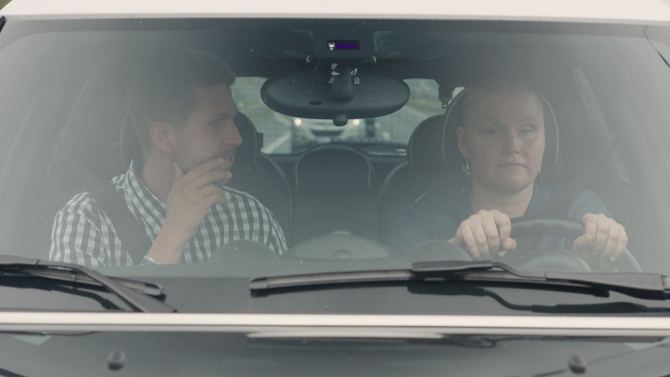 In this project I continue in experimenting with an audiovisual media and its conventions. The main question tabled by this project is how can audiovisual work adapt to a visually impaired protagonist or a participant with a hearing loss. I wanted to practically examine how can actors with a different possibilities of perception transform the way how the movie is made. I concentrated especially on developing script based on the idea of meeting and relationship between two people – one is Deaf and the other is blind. Although these characteristics seem to create barriers in their communication, the movie contrarily shows situations when they communicate, spend time together and do various activities – from watching cinema to dancing or driving a car. Plot of the script refers to historical beginnings of sound film in several moments. The initial moments when sound and image began to be used synchronously appear metaphorically in the artwork which opposes this “audio–visual friendship” and tries to narrate in both – sound and image – separately. Also the script exists two versions – one for the audio and one for the video. Sequence of represented situations is the same but each protagonist is more introduced and present in the channel which can be perceived by his or her. Installation is based on split of audio and video – they’re installed in separate rooms. Cast: Terezie – Alena Terezie Vítek Mac – Mac Henzl Audio description – Zuzana Stivínová Interpreter – Naďa Hynková Dingová Camera: Martin Štěpánek Sound: Jakub Jurásek, Ian Mikyska Editing: Kristýna Bartošová Piano and vocals: Ráchel Skleničková Music and lyrics for Pretty Hands Pretty Face: Ian Mikyska Dance scene choreography: Mish Rais Written by: Alžběta Bačíková and Mac Henzl in collaboration with other video participants Translation and revision of Czech Sign Language: Naďa Hynková Dingová English translation: Ian Mikyska Image correction: Tomáš Hájek Technical service: Jaromír Pražák The work features excerpts from Gustav Machatý’s film From Saturday to Sunday (1931). The scenes from Villa Rothmayer were shot by courtesy of the City of Prague Museum.