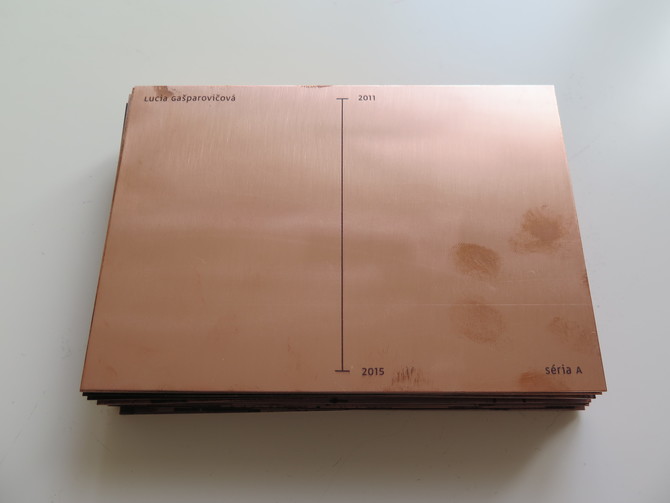 "Collection" of 60 copper objects with dimensions 148x210x1 mm. This work was created over a period of four years (2011 – 2015) and the process of its production consisted of photographic recordings of an architectural segment – the window view. The focus of the photographic recordings became therefore the segment of the cityscape. View from a particular apartment provided a view of Bratislava which, however, did not become a subject of interest. A person periodically repeating an activity, photographer´s awareness of him/herself in particular time and space became important for the project, as well as the confrontation between private and public, external and internal. Capturing everydayness that is intangible in terms of present day and lightens up by looking back to the ongoing past with the distance of time. Using UV printing I transferred the digital collections to copper plates. Copper is disturbed by any contact with its surface, the touch intereferes with the surface and the process of oxidation begins. The more the object is taken into the hands the more darker it gets and it loses its "radiance". Copper goes through the process of irreversible reactions and the printed visual image of the window views loses its intensity.