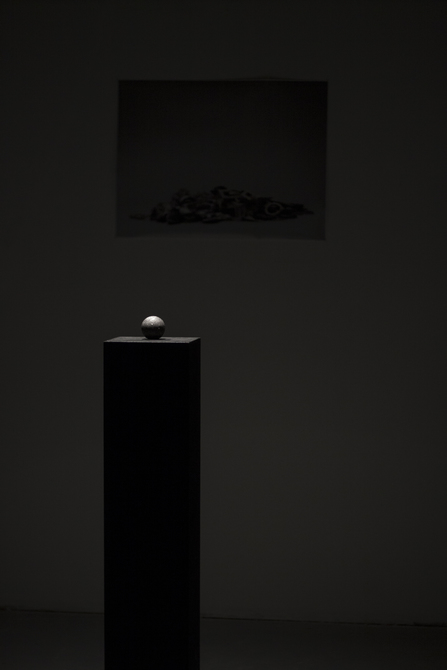 1104 grams is a work that accumulates a number of decisions and a certain volume of material with certain value. All of my works produced from silver in the time span from 2011 to 2016 were fused through the metal meltdown and casted into one final object - a sphere with a diameter of 9 cm and a weight of 1104 grams. Thereby an object was build up freed from its previous visual deposits, intentions, ideas and processes that it was part of. With a lapse of time I looked again at the initial material, but this time only as at a substance with specific properties. (which in the case of silver means its ability to be continuously recasted and formed without keeping track of its previous forms.) I follow the disengagement of the object´s relationship to work and time, which were dedicated to developing its previous ideas. The question remains whether this pure material stands for its market value based on its specific weight (1104 grams of silver), or whether the awareness of the author who transformed it and dedicated his/her own time and work (measurable quantities) adds to the value of the object and also to the opportunity of a relationship with its value. To what extent can we appreciate such a decision? Without this knowledge it is purely a material.