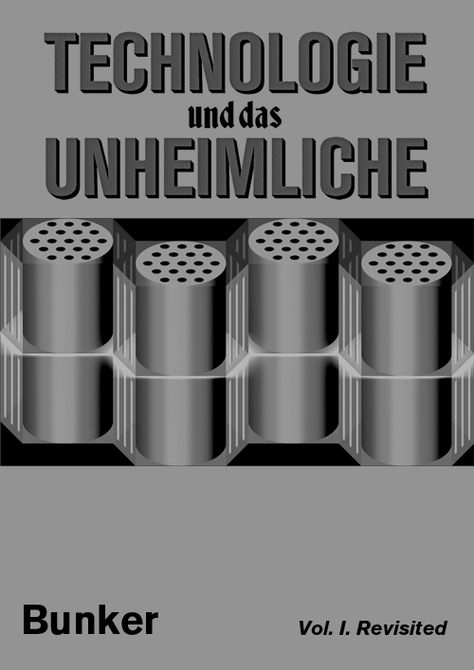 T+U (Technologie und das Unheimliche) is a Berlin-Budapest-Leipzig based publishing project and cross-disciplinary movement, that was initiated by Mark Fridvalszki, Zsolt Miklósvölgyi and Márió Z. Nemes. T+U aims to circuit the cultural phenomena resulting from the confrontation between the conditio humana and technology by thematic issues and related projects. Regarding to this mission, T+U mediates between cultural technologies within the context of post-digitality and tries to contaminate para-academic thinking with artistic tactics. * The first issue of T+U concentrated on the spatio-cultural metaphor of bunkers. As the manifesto of the magazine argues: “In the post-culture we do not wait for apocalypse as it has already happened. There was no nuclear holocaust or other festive moment: we live in a cycle of rivaling doomsdays. We lost our total control on technology, therefore it triumphs over us. What remains is the presentness: gathering and handcrafting. However we prepare shelters for the time of emergency, it is still under discussion what we have to undergo. Our only common sense is bunker fever and mutagenic techno as chamber music.” Therefore, the first T+U issue is a perfect example for how a handcrafted document of personal apocalypse would have looked like in our post-digital vision of counter-culture. * The next edition of T+U (“Dinosaurs”) reflects on the paradigm of terrestrial beings that open up the inexhaustible source of “becoming-other” in the anthropocentric culture. Therefore, the second volume of ‘Technologie und das Unheimliche’ tries to show the technological and post-anthropological dimension in which the biological and cultural self-representation of the human could be reformed by the super-metaphor of dinosaurs. * Our upcoming issue, in collaboration with the fellows of Akademie Schloss Solitude, will focus on the confrontation of mysteries and cultural paranoia. In order to unfold this multilayered phenomenon, we aim to use the notorious cipher machine Enigma as a super-metaphor for technological uncanny that constantly irritates the dominance of Enlightenment humanism and scientific optimism. In that sense, Enigma as a discursive object becomes capable of opening up our imagination to a new field where the irrational, the paranormal, and the extraordinary are not colonized by rigid calculations, but actually stem from the inland of the computational systems. * The key topic of the issue ("Base Matters") reverberates the works of Georges Bataille, as well as the spirit of DOCUMENTS, his renowned surrealist art magazine. The issue of T+U, that has been designed by Anna-Luise Lorrenz, presents essays, collages, photos, and artworks of international contributors focusing on the versatile aspects of Bataille's subversive and ambivalent materialism. A materialism that aims to irritate the hygienic and synthetic realm of pure reason by proclaiming the triumph of formlessness, baseness, and abjection. * More infos: http://technologieunddasunheimliche.com