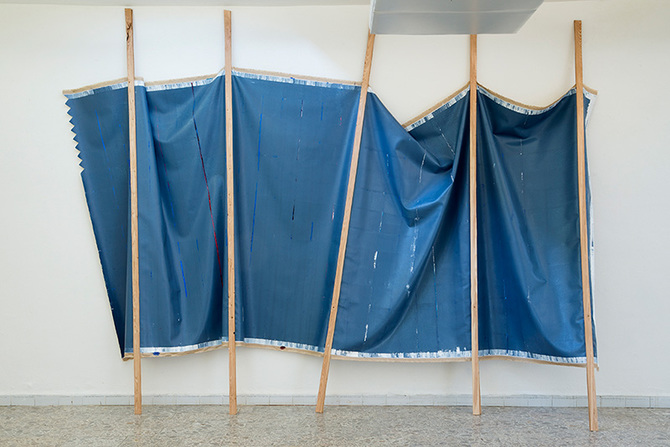 The series is a metaphor for painting reactions and writings of Ludwig Wittgenstein, who in a certain period blew kites. This is the relation between the intellect and the fragile structures floundering in the clouds. ----------------------------------------------------------------------------------------------------------------- Břetislav Malý undoubtedly explores the medium of painting with an utmost intensity. Reflecting painting itself has got its great tradition, be it the awareness of colors and their imanent dispositions, compositional schemes, or the painterly technique itself. Nevertheless, these activities were always intertwined with themes, motifs - with iconographic reasons for painting. In a number of cases, artists were close to a complex, nearly scientific research; pioneers of abstraction are a case in point as far as colors are concerned, for example. During the 1950s, 60s, and 70s, paiting has reached the limits of its modernist possibilities by exploiting the notions of structure, texture, and ultimately monochromatic abstraction. Absolute painting became intellectual counterpoint of conceptual approaches saturated by philosophy, which were expanding across the whole post-war artistic field. Postmodern explosion of the eighties has loosened themes, gestures, and decent manners of painting with its liberated wild painterly terrorism and gave up seeking insights into itself; externality had its dionisic feast. Punk energy lasts only for a while though; painting and painters have calmed down, became smoother and more orderly. They left the painted world go on, fertilized by a unique explosion, as they always had had in history. Liberated painting was hence given the means even in the years to come to synthesize different possibilites – artistsic, social, technical, and iconographic. Neomodernism seems to be one of the latest gains; with a varying degree of confusion, artists explore the highlights of modern and modernist trends which swept across the 20th century. The combinatorics of painterly possibilites seems endless even now that there are artists diving into the morernist adventure with utmost passion. Geometrical construction, color concepts, playful reversals of subject and object, aesthetical expedition beyond the canvas and beyond the image, all these are premises which a contemporary artist obsessed by painting can count upon. Břetislav Malý is one of those who is finding his place and the reasons why paint in this fast flowing stream of the medium. Martin Dostál