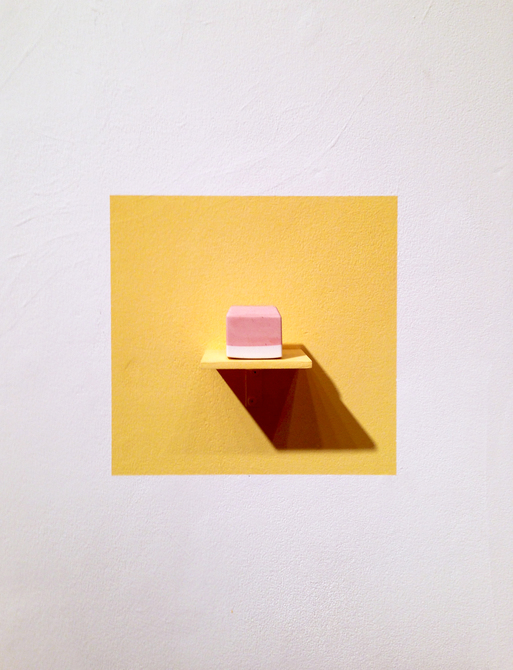 The works presented in the next section were recently created for and during the exhibition I’m Not Done II that happened at Inka Shonibare’s Guest Projects during September, 2015. The exhibition also functioned as a residency where new materials and modes of display were tested. For the developement of the pieces, new technologies for the production of DIY materials as well as “innovative food stuffs” were considered, such as plastic cheese slices, character meat slices, MDF and astroturf, combined to the visual language of marketing. Notions on presentation through toppings/coatings, slicing and oozing were applied, bringing to light questions on the divided versus the whole, the limits of the “organic”, the alive and the dead, the hidden, the sensual and the absurd. Brought back to the arts context, the sculptures refer to pace and movement through seriality and repetition at the same time that they propose a dialogue with minimalism and geometric abstraction. In their turn, such movements also made use of innovative materials and speculated over the many directions “progress” might follow. Playing with notions of exaggeration and over-manipulation, those objects aim to act as a clash between physical senses, where the edible, the visual, the tactile are constantly annulling each other.