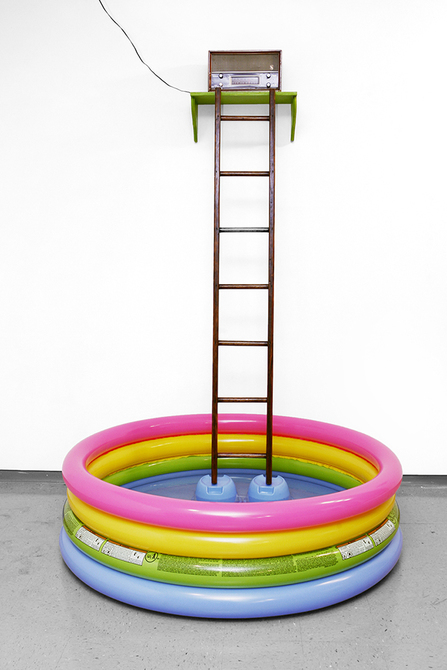 In Sooner or Later an inflatable and colorful pool is halfway filled with water, symbolising a 'pessoptimist' nation. It is pierced with a small hole and leaks slowly but gradually creating a meandering puddle around it. Inside the pool are two blue buckets precariously forced down by a handmade, stained ladder. The ladder was based off of handpicking orchard ladders used to pick dates or fruits. The ladder leads to a green shelf that formally reflects the hazardous green ring of the pool below. It supports a 1950's Magnavox radio a metaphor for state power and control. The white noise emitted undulates in tone and volume, creating a subtle but frustrating experience around the piece. It tests the flight or fight mechanism of the viewer and the sense of relief is only experienced when leaving the room. The radio's power is sourced from an outlet in the ceiling that is unreachable. It's electrical presence over water adds a dangerous sensation. Sooner or Later questions collective cooperation in a nation that strictly infuses patriotism using archaic methods of propaganda. The social hierarchy is proposed both in it's formal figurative appearance and sensual experience. It is a metaphorical representation of the artist's experience of Kuwait's society both in it's seductive and restrictive qualities.