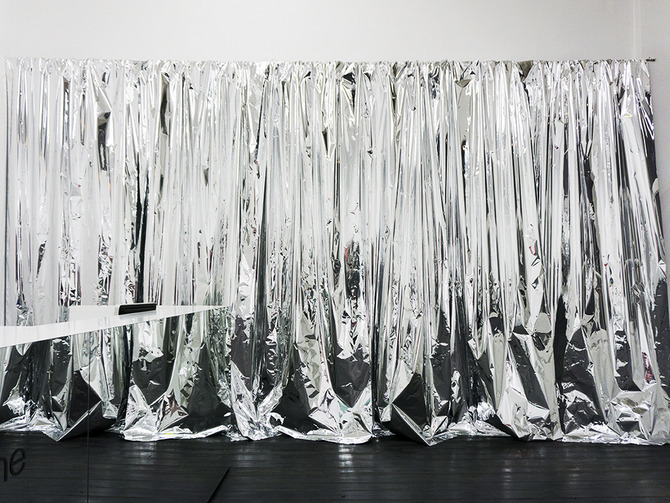 In the three-part work "for the future because of the past - specters everywhere" (the curtain, behind the curtain, because the curtain) Borjana Ventzislavova deals with the propaganda of the "East" and the lure of the "West". The silvery curtain remi- niscent not by an accident the former "Iron Curtain", which stood for the seemingly insurmountable boundary between NATO and the Warsaw Pact countries. It seems to be hiding something seductive: A subject? A longing? The beautiful real life? At the same time, it refers itself as a ready-made Pop Art, a product of the world of consumerism, where the packaging is more impor- tant than the actual content. “for the future because of the past - specters everywhere” is that however Behind, revealed gradu- ally. On an almost overly nice kitschy-looking island is shining the neon sign "the bright future is still coming". This is, howev- er - very surprising for the Communist a rallying cry, with which the artist has faced as a teenager in her native Bulgaria. This sentence, which could also be derived from the Meditation Handbook for stressed managers, as well as the doubling and tripling of the motive stand for the relatedness of ideologies that are broken ironicly in this work. Claudia Slanar