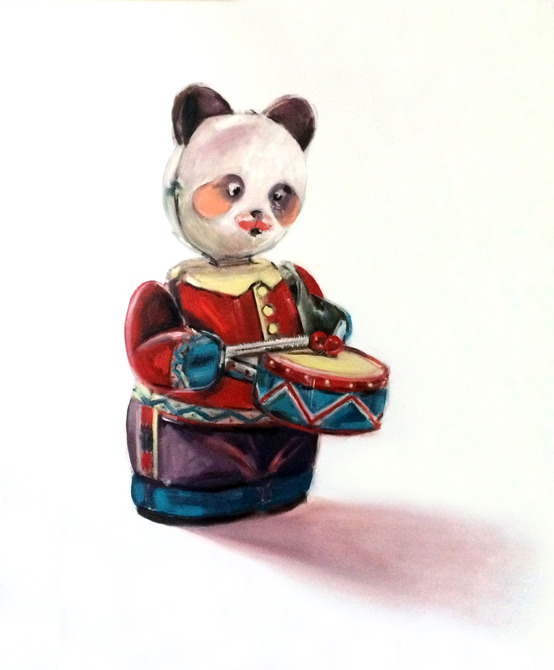 "To domesticate something you have to look into its eyes. You must go close, look for the eye contact and stand the wild, dangerous gaze. For me this exhibition is about gazes, eyes, even when its about the lack of them. Lately, she interprets her child’s drawings onto canvas with embroidery technique. Being personal is her ars poetica, with Louise Bourgeois she states: only the personal is interesting. … Rainbow Girl’s first impression can even be scary. But spend some time with her and you will realize that she just wants to gain attention through her rough image. She’s an urban Daphne: has grown the cortex of self-defense. If she gets a little care, she will reveal interesting things just as her heart is completely uncovered. Her far relative is the lively hero of the Aria. His character is airy and flowing, his silhouette isn’t completely solid, but does it even matter? He’s white on white, he’s after a star with full drive, of course, nothing else exists for him. That’s the way of being purposive. It complicates the picture if you’re not the only one in it. When more characters appear, the small marks of the relationship between them becomes important: whether the doll lets herself being led by her company…In the Infant two techniques meet: a painted portrait is fancy-worked with the third dimension of embroidery. Still, the flesh-colour appears rather to uncover than hide the face and the left arm. And this is the heavy part: dividing the true self and the debris of the roles pulled on us. Can we ever be sure whether we’re actually unfolding or veiling something?" details from Illés Molnár poet’s exhibition opening speech of Domesticating Childhood, Central European University, Budapest, 2012