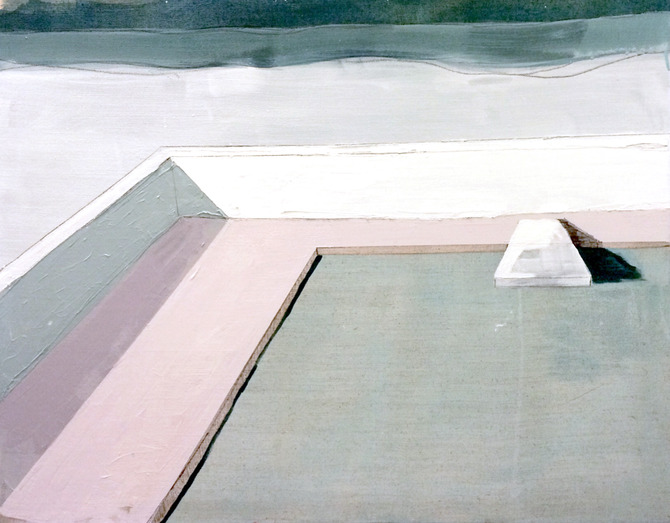 My most recent group of paintings began with an exercise in restraint. Instead of giving into a pull towards a painterly and worked surface, I wanted to explore the process in a different way. So I began to look at every mark and layer and took the mistakes as they came. Simultaneously, I was studying scenes that were profoundly expressive and pronounced, but not in an immediate way. Rather than painting faces and figures, I focused on the positions of furniture and the interacting lines that make up a structure. This developed into a way of depicting something that I have always aimed to express, a feeling that is simultaneously quiet and powerful. For the last few months I have specifically circled the subject matter of swimming pools. While working on the pools I decided to title the series “Sorry I’m Late”. This frequently used phrase captures the paintings’ familiarity and vulnerability. It also emphasizes the role that time plays in many of these paintings, whether it is standing still or creeping by, as well as an unspecified feeling of absence. Pools tend to evoke nostalgia for childhood swimming lessons and suburban summers, but left alone they have a compelling stillness. In this I found endless depths. A quiet, empty moment caught in a setting that is most commonly a place of gathering and action results in a voyeuristic look at the unseen. This combination is set with an inexact and off-kilter representation of line. These images require the onlooker to doubt any notion of hospitality, but also to be willing to dive in. They are pools you wouldn’t want to swim in and badly built furniture. Something you know, but that is also uncertain.