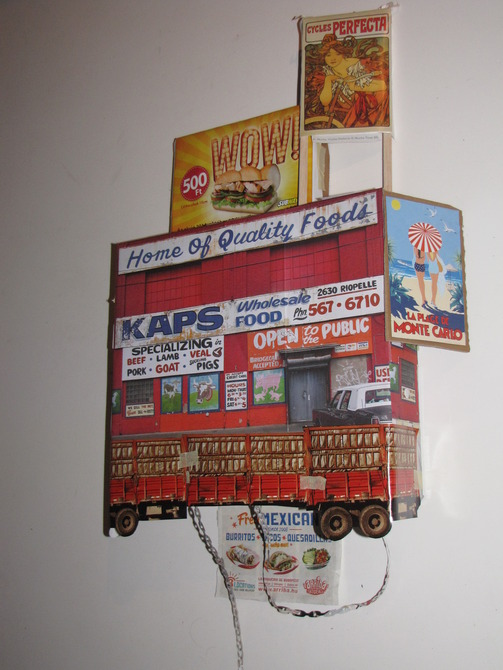 In the collage art of Gábor Kerekes recycling is not just a technique but it is a mission as well: sustainability is one of the most important alternative for survival, furthermore it is a good example for handling the problem (trash) exquisitely. Newspapers, the basis of his works and the city which is his living space are present in his works from the beginning. The first and complex interpretation of this subject was Babel, the growing city which collage installation was exhibited in 2011, in Viltin Gallery. Here, the tower was shown in the construction process, which is a reference to the mistakes made by the civilization again and again. In the state before the chaos you can feel the bad vibrations but it hasn’t taken shape yet (as it hasn’t been in any other works of Kerekes). No figures have appered yet on the plane surface of the carrier, he emphasized the construction, which was already 4 meters high. In 2015, Füsun Ipek curator saw the construction phases of this installation when he visited the artist’s studio. She then asked Gábor Kerekes to exhibit his work at the exhibition organized as a parallel event of the Istanbul Biennial. The “phase” exhibited there was still on the wall, but it has already had parts reaching out to the space: he agitated the surface of the collage with small and bigger boxhouses – in 5 meters height. He is continually building his works by stepping out from the plane surface and creating a 3D structure, but this is the first, completely 3D, stand alone, statue-like installation and so far the highest. The central tower is surrounded by balloons, which were created parallel with the other Babel interpretations made by Kerekes through the years – and appeared as independent works at the finale of Leopold Bloom Art Award (Ludwig Museum, Budapest, 2013). The installation is complete with balloons around the tower, which are representing moving cities, and the tower is the base, some kind of “service station” for them.