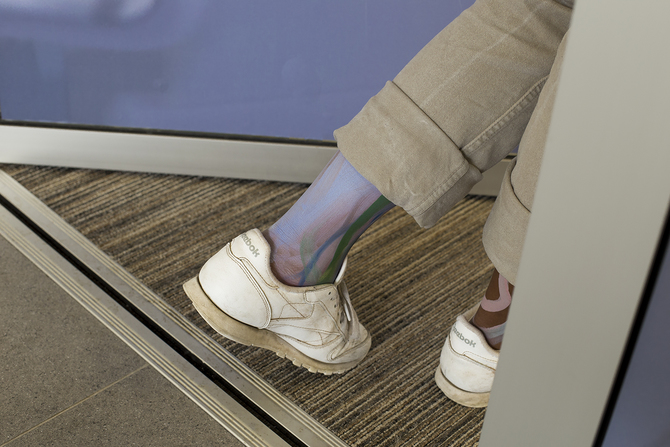 The word Polysemy refers to the capacity of a sign, image or word to have more than one meaning. This exhibition is the fourth in a series of collaborations between London based Večeřová and Prague based Příkaský combing painting, performance, video and site specific performance in a unique creative dialogue. For Polysemy the exhibition space is simultaneously installation, stage and a site of performance. Adopting the visual language and commercial tropes of high street medical providers, the exhibition takes its form from a new collaborative video work, Inner Monologue (Večeřová and Příkaský , 2016) which was shot partly within a doctor’s surgery. The waiting room aesthetic, embracing the architecture of the gallery and its shop front context, creates a looping meta reference between art work, location and audience. The installation itself becomes an artwork, an intervention within the landscape of shop fronts, offices and private residencies. The uncertainty created between the visual appearance of the installation and it’s operation as art work speaks to the artists’ concerns with ambiguity in relation both to their use of imagery and it’s reception. Narrative and figuration combine with abstractions and ambiguous signifiers to create a mysterious and fragmented view of the world which, perhaps superficially recognisable at times, remains elusive and out of reach, like a sensation of déjà vu. There is a richness in the tension between the apparent familiarity of the wider image and the strangeness of it’s details. Polysemy weaves together large scale, microscopic photographic images with sculptural interventions in the gallery space, abstract painting with video work and perhaps most mysteriously a huge image of a woman about to undertake an MRI scan. The sterile environment, bulky equipment, tubes and flimsy medical robes combine in the familiar medical trope. However, rather than being prompted to a refection on the patient’s predicament, the viewer is drawn to her feet: smeared with pastel yellows and blues, in a manner reminiscent of the Indian Holi festival of colour. This use of colour, it’s juxtaposition with the larger sense of the image, transforms both the woman’s participation and the image’s power as a whole, into something altogether more performative. The painting and other interventions in the space that punctuate the installation are imbued with the same sense of ambiguity. First appearing as gently coloured, abstracted forms, they contain a more complex index. Figurative forms emerge from the images; an eye, a mouth, they speak to the perception that is gained from stillness. The relationship between image, action and space reoccurs throughout the installation. It is conceived as a work which can be experienced from the street or within the gallery. One can pass by with a glance or come in and wait. Look. Perhaps become part of the work for those walking by, figurative additions within a conceptual construct in which the action in the space becomes part of the image. Not all these tableaux will be happen stance. In addition to the their works and sculptural interventions, Večeřová will work with Příkaský to devise a new performance within the installation, developing its formal concerns and further interrogating the relationship between image, sculpture and performance. This performance will be free and open to public, taking place at 3pm Saturday 12 May. Večeřová and Příkaský seek to blur the lines between their disciplines placing works within one another, layering connections and conversations. Throughout these interactions the artists consistently steer a course between figuration and abstraction, the narrative and the incidental giving their collaborations the space in which to speak. In expanding this language Polysemy becomes eponymous – an exhibition which is more than the sum of its parts, activated and articulated equally by viewer, performer and artist. In exploiting the potential of ambiguity in this way, disrupting visual expectation, the show becomes a space to reconsider the narratives constructed around us. -----'Ben Roberts is Director of the Artists’ Research Centre and Associate Curator at Central Saint Martins, University of the Arts