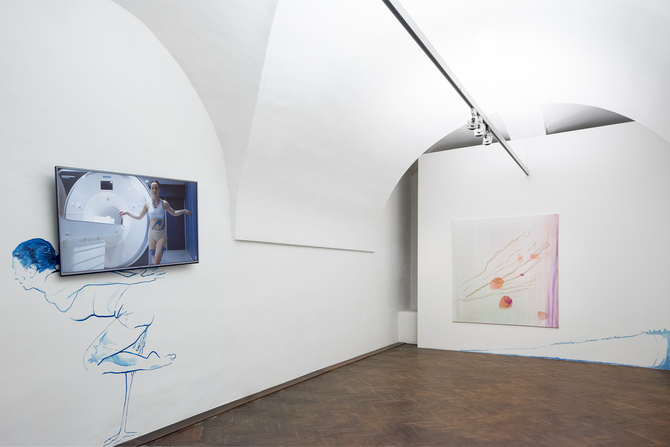 The walls of the gallery become haptic and tactile, the painting with wax becomes something intimate resembling a piece of clothing. The institutional sterility of the space is filled with the sound of modern medical technology. One logical consequence of the relationship between painting and space is motion, in this case usually the movement of the performers, who are present either physically or on the video screen. The artists’ attempt at making use of all suitable tools in the interest of expressing a certain standpoint can be described using Yve-Alain Bois’s by now classical idea that a particular historical form is the only adequate solution to expressing an authentic position on a real problem. His 1990 collection of essays, Painting as Model, “makes a good argument for basing an approach on a closely interwoven study of form and ideas – really, of ideas as or in form” (Witkovsky, 2016). The subject of both artists’ “artistic study” is the urgent sense of anxiety caused by today’s rapidly changing socio-cultural situation and the confusing physiological changes to our perception and thinking, which are barely capable of maintaining a clear distinction between the material and immaterial, real and virtual, physical and imaginary. Večeřová and Příkaský gave the exhibition preceding Antidote the title Polysemy (Czech Centre, London, 2018), a word indicating the ability to have multiple meanings. Their presuppositions are based indirectly on the latest biotechnological research, which understands matter as energy and information, and where an important role is played by constantly changing constellations of interrelationships, “entanglements of configurations among people, animals, artificial intelligence, electromagnetic radiation or emotions and physicality” (Šlesingerová, 2017). Večeřová and Příkaský realize how easily subjective awareness of one’s role within this system of life can paralyze individual creativity. On the symbolic level, their goal is thus to find a method for “renewing the creative tissues” of the contemporary artist, who is a natural part of these ontological configurations. They have attempted to verify their “artistic diagnosis” among other things through methods of medical examination. For this exhibition, in which they make use of magnetic resonance or the previously mentioned scanning electron microscope, the stage for their “artistic research” and subsequent “therapy” was the interior of the National Institute of Mental Health. The employees of this organization, which describes itself on its website as a “medical research institute working with the methods of molecular biology, animal modeling and clinical research and testing,” were exceptionally welcoming of the unexpected artistic intervention into the institute’s operations. The natural way out of this de-individualized phase of being is the path of “disrupting the duality of body and mind” – i.e., “an interest in physicality as a space that is potentiality as well as materiality and information” (Šlesingerová, 2017) and an awareness of ontological relationships on the level of physicality. In their recent video Inner Monologue (2017), the two artists combined an artistically conceived form of physical “treatment” with an “atavistic composition of new rituals” (Jen Kratochvil, 2016), thus also underscoring the fact that scientific research is always dependent on contemporary social conventions. The main method that Miroslava Večeřová and Pavel Příkaský use in their current project, Antidote, is an original choreography filled with references to specific types of physical exercises, in particular manipulative therapy, which is based on physical exercises that imitate the movement of animals. This specific form of therapy involving the use of “animal” movements demonstrates in a remarkable manner the cultural shift involving the “conceptual expansion of the boundaries of humanity and the emancipation of other forms of life” (Braidotti, 2013). A parallel symbolic level to the Večeřová and Příkaský’s diagnosis is the search for ways of eliminating the damaging effects of technological influences on human or other species and on the environment in the Anthropocene in general. In their search for a suitable form of therapy, the artists make use of (seemingly) precise, but actually openly metaphorical, tools. One of these is the application of antiseptic pigments onto the human body, canvases, and the gallery walls. For the exhibition at Prague City Gallery, the main color is Prussian blue – a chemical mixture used as an antidote for poisoning by thallium, a highly toxic heavy metal used in new technologies such as mobile telephones. The use of pigment follows up on the artists’ previous use of “painting as an antidote” in their joint exhibition at Karlin Studios (Part Two: Artificial Respiration, Galerie KIV, 2015), where the “antidote” was crystal violet, which is used in medicine and laboratories as a dye and antiseptic. When Miroslava Večeřová and Pavel Příkaský create specific visual, tactile, and sound-based mosaics, on the symbolic level they are presenting autonomous, self-organizing systems. The presence of monumental enlargements of microscopic images of living tissues, “treated” with painting in a similar manner as the depicted bodies of the performers, immediately evokes this parallel. The artists give material form to models of relationships that can be fleeting imprints of a wide range of potential living tissues and systems, for instance in the form of social networks. By placing this metaphor into an institutional setting, they additionally give it a certain political context, and shift their artistic laboratory research one step further, into the realm of “applied art. Jitka Hlaváčková