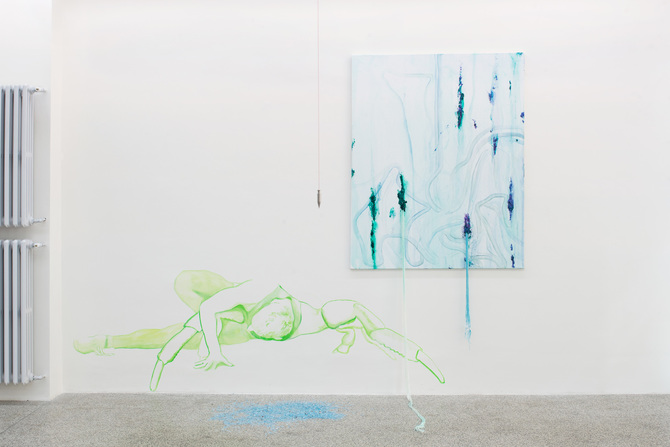 Living matter – including flesh – is intelligent and self-organizing, but it so precisely beacuse it is not disconneted from the rest of organic life.----‐--------- Rosi Braidotti, Post-Anthropocentrism: Life beyond the Species------------ Isotonic /iso·ton·ic/ (-ton´ik) 1. denoting a solution in which body cells can be bathed without net flow of water across the semipermeable cellmembrane. 2. denoting a solution having the same tonicity as another solution with which it is compared. 3. maintaining uniform tonus.------- Dorland’s Medical Dictionary for Health Consumers, 2007-------- The Salt------- The salt in the small bowl looks up at me with all its little glittering eyes and says: I am the dry sea. Your blood tastes of me.----- Ursula K. LeGuin------------------------------ Fantasy images fluently fade from one medium into another. From space to surface, from live performance to painting or from moving image to drawing. The essential and ubiquitous ingredient of the liquid process that avoids the boundaries between the living, and the inanimate is a soluble salt crystal: a substance saturating a solution of human and animal blood. Isotonic Song tells the modern mythology of hybrid beings, the theme of internally conflicting corporealities is present for a time in both archaic polymorphism, and the futuristic perspective of biotechnology. Song and breath, rhythm and crystallinity of the composition— inner monologues in productive counterparts to contemporary paradigms. Pavel Příkaský and Miroslava Večeřová, a long-term collaborating duo, are revisiting the organic characters and fluidity of previous multimedia installations within the Isotonic Song exhibition. As in the mutual Antidote project, the elements of handicraft and painting are the counterparts to frequent themes borrowed from science including its reserved and descriptive schematics. The subject of exploration is accompanied by feelings related to physical processes and their subjective mental representations. Something found deep inside the bowels gets turned outward and vice versa. The visualization of something sensibly unaffected in our mind formulates new knowledge and discoveries of medicine. This is confirmed by the current practice of authors who, through the examination of the inner world, question the concept of man as a measure of all things. They overcome the crisis of posthumanism by immersing themselves in the most elementary material essence. In sea nutrient solution, the horseshoe crabs saturate their body fluids. Their blue blood is collected to detect some types of bacteria, and is one of the most expensive substances that a person uses within her/his own body. Could a horseshoe crab or bacteria be a measure of all things? We can imagine the political panorama of a hierarchical life on earth in the posthumanistic perspective of an inorganic agent, in our case the salt molecules traveling from one physiological environment to another. By involving animals in the creation process, the authors symbolically intervene the pillars of the anthropocentric model, highlighting both their exclusivity and manipulation. Behind the individual stops and scenes of the exhibition, we can see different stages of ion regrouping. Salt penetrates living organisms as well as inanimate nature, in both solid and liquid states. The resulting shapes of the salt objects arose from the spontaneous need of the animal, the work within the space gives another level of meaning to the salt, the crystals covering the details of the textile and the walls framing the exhibition– these become the environment. Nowadays, there is much to go beyond the genetic delimitation of the genus and species. Perhaps even the idea of ​​a ubiquitous hybrid in the human imagination reconstitutes our bodily feelings. Various types of hybridity, morphing, and body interfaces reflect the different interactions of man and animal, and different modalities of dominance or coexistence. The artists provide us with a number of metaphorical situations, revealing various relationships between humans and animals, and what becoming an animal is. Perhaps our body isn’t able to catch up with the present. Returning back to the fantastic zoology of archaic cultures today, sincerely expresses existential helplessness from the future. Anatomy of a new mythological being is generated at the intersection of magic and laboratory. The mythical animal, as a hybrid creation, is outside the evolutionary chain but its presence in the human imagination is an attempt to balance power relationships and interactions, or at least a place to stop in the liberating flow of imagination. Mariana Serranova