The November selection represents 6 artists out of 60 who applied through our open call. Each of the artists got professionally reviewed by curator Rona Kopeczky, who was also in charge of the selection itself.

Agata CZEREMUSZKIN-CHRUT was born in 1983 in Poland. After attending an art college from 1997 to 2003, she studied at the Academy of Fine Arts in Wroclaw where she gained a Master degree in painting in 2008, then achieved a postgraduate formation at the Academy of Fine Arts in Warsaw in 2012. Her paintings are subtle mirrors showing how she seizes and perceives her environment and surrounding, or in what way she processes feelings and impressions usually related to a person or a body. One of her most characteristic touches is the contrast between the sterile atmospheric, geometric, or even perspectival background and the dynamic organic forms stepping out of it. For the artist, naturally interested in opposites or complementary couples such as life and death, soft and hard, esthetic and non esthetic, geometry symbolizes the technical world, machines, cleanliness by which the western civilization attempt to escape from death and biological roots.

Working with preparatory sketches (Meat&Geometry series, 2014) or using photos as a source of inspiration (Beds series, 2014) before starting one piece, the painter creates the different plans and surfaces with a variety of techniques – impasto and other medias employed in oil painting – which allow her to play on textures by making some areas glossy, some others matte. According to her, the most difficult part of her work is catching the human body, finding the right way to show it without saying too much. She aims at unveiling moods, relations, memories, shadows without showing all of the human body. By deconstructing then recomposing human forms, Agata crystallizes them into essential chromatic impressions and dynamic moments. To illustrate her ideas, she quotes Francis Bacon: „I would like my pictures to look as if a human being had passed between them, like a snail, leaving a trail of the human presence and memory trace of past events, as the snail leaves its slime." 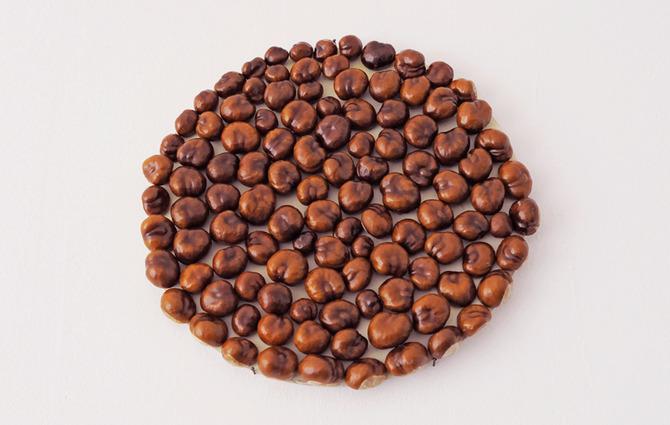 The young artist was born in 1989 in Poland. She studied at the Academy of Fine Art in Katowice from 2008 to 2013, when she achieved a Master degree of Fine Arts with a specialization in Graphic Arts. She currently lives and works in Katowice. Mainly focusing on drawing but also using various media to express herself, she sees narration as an attribute of our existence into which every element of the reality is clothed, and roots her works into very personal plots, stories but also intuition, inner impulses, coincidence as well as chance, and deals with the magical dimension of our existence manifesting itself in the subtleties and simultaneities of reality.

For her poetic project entitled Subjective walks (2014), composed of wire drawings floating in space, installation made of objets trouvés (found objects) and graphical works, Izabela Aleksandra LESKA walked every day ritually in the city of Berlin. Diving into it, exploring its ongoing, dynamic and spontaneous structure, she stayed focused on the signs that the urban organ was giving to her: a man, a piece of trash on the sidewalk, or a word spoken in a foreign language. Each elementary decision: to go right or left, to follow someone or not became decisive for the final form of the project being made consistently every day. What becomes in one case a possibility and develops a network of new solutions, closes the other ones at the same time. The magic of potentialities. Through this creative approach and process the artist generated her own a subjective mythology in which the setting is a parallel urban reality and system, gods become specific choices, preferences and decisions, and myths transform into existential questions: Is there such a thing as a coincidence? Does a series of coincidences become the destiny? And they are playfully left unanswered and open, of course. 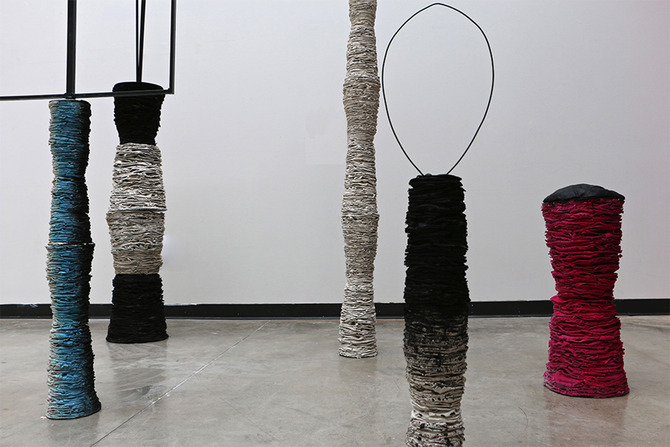 Suzanne K. TORRES was born in 1982 in the United States. She specialized early in sculpture at the San Francisco Art Institute, and presently pursues her studies at the University of Wisconsin-Madison, where she is candidate for a Master degree in sculpture and ceramics (2015). In her artistic practice, the American artist borrows elements from our physical and natural surroundings and reinterprets them through scale and abstraction. She mainly works with clay that fascinates her for its material properties and immediacy it permits in her work.

Going beyond considering clay as a simple reference to natural processes and energies in Nature such as gravity, erosion, compression, and renewal, Suzanne K. TORRES also explores, examines and dissects its changing physical states, its properties and the process of building with a material that is in flux while using it. The act of stacking clay to create mass, structure and form became a meditative and physical act for her, in which there is not a set outcome, but an experience in making. She creates large-scale sculptures and installations that have an evocative presence and, by extension, explores the body’s interaction with space: they seem to float or stand by their own will (Gathering, 2014; Screen, 2014), to break through the wall (Untitled, 2014), to occupy the whole space on purpose, as a warning sign (Gray Frame, 2014) or the opposite, to envelope the viewer as a kind of protecting nest (Stacked, 2012). They appear to exist in a realm of time somewhere between birth and collapse, as both degrading and emerging letters of a long forgotten alphabet. Often exceeding human scale, Suzanne’s works are totems, monuments, reliefs and sculptures of space. And if perception – visual, spatial, as well as sensual – is obviously central to the artist’s practice, something more is happening here: the works silently mirror, reflect and echo the viewers’ own bodies in space. 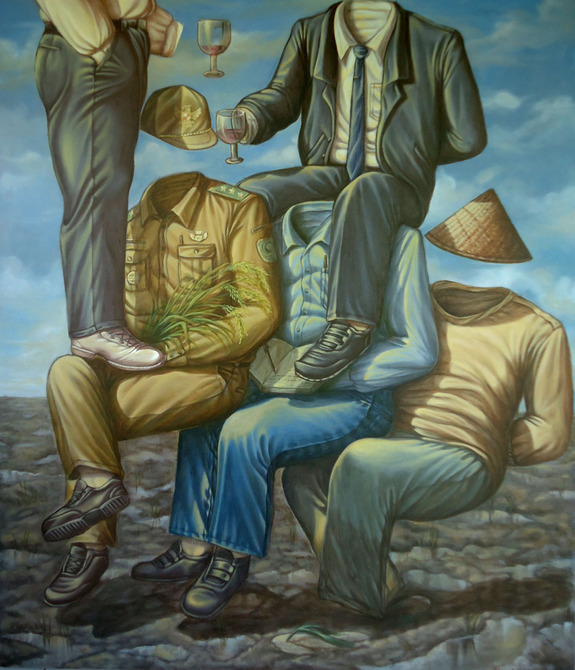 Harun AK AK was born in 1985 in Yogyakarta, Indonesia. He studied painting at the Fine Arts department of the Indonesian Institute of Art from 2007 to 2014 in Yogyakarta, where he currently lives and works. His paintings figure in various Asian collections and he has exhibited in different major cities such as Seoul, Shanghai, Los Angeles and Singapore. In his artistic approach, Harun AK AK reacts to public life and social as well as political issues in Indonesia, and addresses these topics through the theme of clothing. According to him, clothing fashions and habits reflect the best the tensions between local identity and cosmopolitanism, tradition and modernity. The artist sees clothes both as cultural symbols and a medium of social criticism in a multicultural, developing country.

Harun AK AK mainly paints dressed up but transparent human figures, sometimes weirdly entangled and intertwined in a way evoking optical illusion, sometimes with clear reference to surrealism (ironi agraria, 2013). Only their clothes and occasionally their feet and their hands are visible, but never their head – they remain faceless, anonymous, as if losing their individuality and identity by adopting western clothing fashions. On the one hand, the pair of blue jeans is a recurring motive and symbolizes the Western culture in the Indonesian artists' paintings, mostly as a representation of popular culture slowly becoming part of the traditional dress culture (oppressed, 2014). On the other hand, he also refers to traditional clothes like batik or lurik, considered so far as old fashioned, but worn again by a younger generation as a symbol of their national identity and culture. Harun also examines the symbolically loaded motive of the uniform (the last harvest, 2013), especially how Indonesian governmental bodies or bureaucrats abuse of the authority that it grants them, while ignoring the fate of small people living of farming in the suburbs, like the artist's family.

Patric SANDRI was born in 1979 in Switzerland. He studied at the Lucerne School of Art and Design until 2007, and then achieved a Master degree at Royal College of Art in London in 2012. He currently works in Zurich, Switzerland. As an artist, he approaches and explores in a conceptual way the perceptual qualities of light with mainly monochrome white and black paintings. By examining the physical potentiality, plasticity, corporeality and chromatic character of light, Patric SANDRI goes against the process of abstraction itself as he makes an immaterial element (light or obscurity, in the case of the black paintings) gain materiality (in paint).

His monochrome white paintings series (2013-2014) are experiments and attempts to embody and reflect the perceptual qualities of light, paint and material. Natural and artificial light itself – as reflective element, as ambient phenomenon, as illuminating energy – becomes the physical and conceptual source of these paintings. Through the changing light conditions and different viewpoints, the chromatic character of the paintings changes. In that sense, his work also focuses on the awareness of the ‘gaze’ and the process of looking.

Technically speaking, Patric SANDRI works with oil and old brushes and constantly walks around the canvas and changes positions while painting. During this process, he generates a tension between the conflicting actions of ‘doing’ and ‘undoing’, by adding paint and removing, reversing or cancelling previous marks or layers. These paintings convey an impression of uncertainty, of “perceptual inconsistency”, as the artist himself puts it: is what we see the result of natural light effects on the painting, or is this luminosity painted? In that sense, Patric SANDRI’s works are at the same time abstract painting as well as pictures of abstraction. 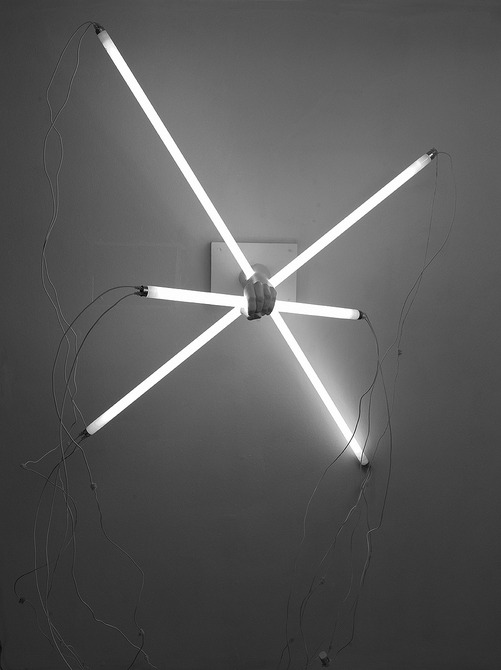 Brian RAVNHOLT JEPSEN was born in 1977 in Denmark. After obtaining his Bachelor degree in philosophy at the University of Copenhagen in 2003, he turned to fine arts and achieved a Master degree in sculpture and installation at the Funen Art Academy of Onense in 2009, and in parallel a Master degree in graphics at the Royal Danish Academy of Fine Arts in Copenhagen, where he currently lives and works. As a result of his diversified education and interest, the artist uses a variety of media – installation, sculpture, drawing, model building, video, photography and sound-performances – and approaches his practice from different theoretical angles – with a focus on the story, the link, the site, the viewer and society.

His series entitled Fluorescence (2009-2013) developed as an ongoing brainstorming on new works incorporating fluorescent light in a new, unseen or unknown matter. From this starting point, the artist tried to figure out how much this given method or concept could be stretched into the possibilities and capabilities of involving cross-concepts, other objects like a chair (Chair of Revelation, 2010), or a guitar (Music Box, 2010), materials like varnished wood, duct tape (the numbered works) plaster (Untitled #4, Sets #1 & #2), oil (AA 191 & JAL 321). In that way, Brian RAVNHOLT JEPSEN develops a vocabulary, a language of light, symbols, forms and patterns that might seem religious at first sight, thanks to their extreme clarity and simplicity, but the artist’s practice is not driven by spirituality. The sphere of peace and tranquillity arising from fluorescent lights is somehow balanced by the reference to ritual signs, old ceremonial and religious use of occult symbols, bringing back the artist’s works on earth and transcending them into a conceptualized and intellectualized world of cross-references and ideas.