This month’s Featured Artists includes 6 young and exciting artists from Mexico, Italy, Austria, Hungary and Poland that were selected and reviewed by our chief curator Rona Kopeczky.

The reviews highlight some of their works and provide a deeper insight into their artistic practice. 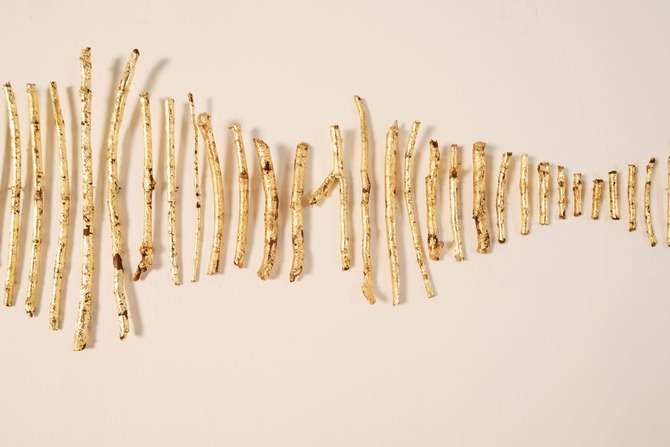 “I consider myself an ontologist with a heuristic methodology”, writes the artist about himself. Born in 1980 in Mexico, Gabriel RICO studied at the Instituto Tecnológico de Estudios Superiores de Occidente in Guadalajara, where he gained a Master degree in architecture in 2014. Nevertheless, he reveals himself as an artist, focussing in his practice on concepts such as fragility of space, knowledge representation, exploration of audio-visual terms and origins of information, showing an interest for philosophical analogies and scientific models. He currently lives and works in Mexico.

The piece entitled Oro, Madera & Miel (2014) visualizes the sound spectrum generated by the artist’s voice when naming the materials which entered into the composition of this piece. Collecting branches in public parks and gluing gold leafs on them with the help of honey, Gabriel RICO created a completely new context of interaction, interpretation and signification for three components which were used for embalming in Ancient Egypt. While the purpose of this ritual was to preserve human remains and therefore organic elements with a physical existence, the artist diverts this practice from its original context and proposes first to give a body to something that does not have any – his own voice – and then to preserve it. A goal impossible to reach, as the viewer is not able to read and hear the tonalities from a sound spectrum, both as impossible and at the same time as magical and deeply rotted in the collective conscience and fantasy as the preservation through mummification of a body for a future rebirth. Oro, Madera & Miel is therefore a poetic and esthetic exploration of how to materialize the immaterial, how to preserve the non-preservable, at the end of it all, how to leave a trace of our uniqueness after us. 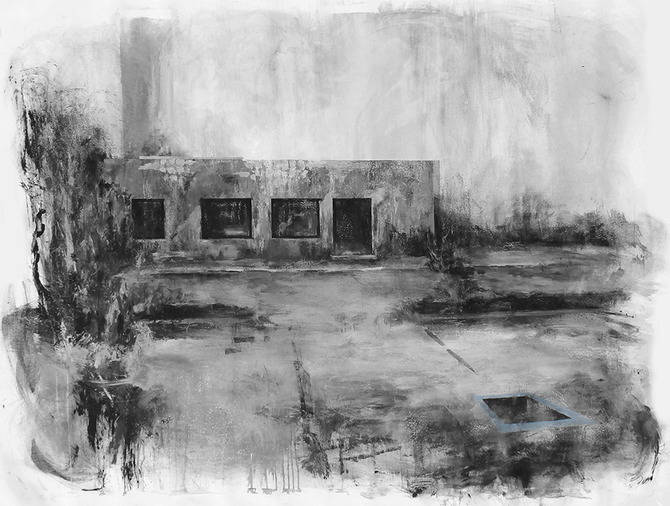 Géza RICZ was born in 1980 in Former Yugoslavia (now Serbia). Before starting his artistic studies, Géza was a prolific graffiti artist and realized numerous murals across Europe between 2000 and 2007. From 2004 to 2009, he was involved in the organization of street art events and exhibition. He gained a Master degree in arts in 2013 from the University of Szeged, in the South of Hungary, where he presently lives and works. As a result of his early interest for graphic art, his multifaceted activity embraces painting, graphic design as well as illustration.

His painting series entitled Phantoms of the Borderland (2014) is depicting abandoned gas stations on the border-land between Hungary and Serbia. The narrative power of these works lies in the deeply rooted symbolic meaning of these now decaying buildings in the memory of the locals, amongst them Géza himself. As a result of the embargo imposed on Yugoslavia by the International community during the war in the 1990’s, fuel trafficking developed and gas stations multiplied on the Hungarian side to provide infrastructure for this flourishing commerce. Prospering for a few years, the stations lost their purpose and closed after the embargo was lifted. Most of them are still standing and became not only an architectural phenomena of the region, but also memorials for war and migration resulting from it, homelessness, isolation from Europe and survival economy.

After a first research phase dedicated to photographing various stations, Géza RICZ painted the series after the pictures he took. The shades of grey, the blurry outline of the landscape in contrast with the sharp lines and edges of the phantom building, as well as the dripping of paint generate a dramatic effect and emphasize the atmosphere of decay, desertion and despair emanating from these skeletons. 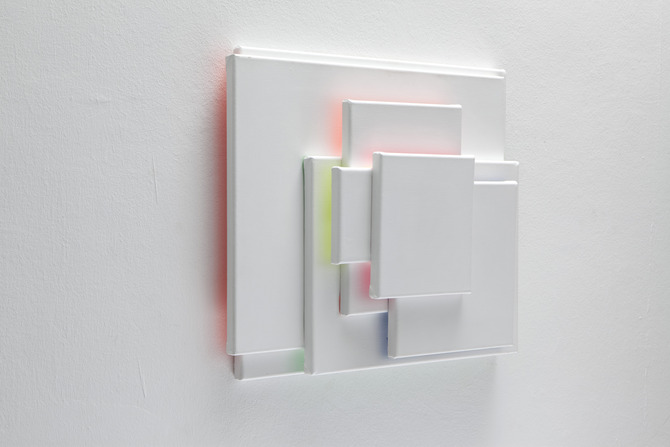 The painter Johanna BINDER (b. 1985 in Austria) studied at the University of Applied Art in Vienna, where she obtained a Master degree in fine arts in 2013. She currently lives and works in the Austrian capital. The artist expresses a strong interest for the formal characteristics of painting as subject matter in itself and therefore examines in her work the activity of painting, its basic principles and the characteristics of the medium. Through this structuralist approach, she focuses on the three main pillars on which it lies: light, the image carrier and paint, as well as the subsystems of painting such as colour, two-dimensionality, structure and space. The deconstruction of the pictorial language allows Johanna BINDER to isolate its components in order to reconnect and relocate them in a different way.

In Ohne Titel (2012), the artist concentrated on the natural limits imposed on painting by the outer border of a stretcher-frame. Her intention was to widen these limits by releasing the colour from its boundaries on the surface of the stretcher-frame. And the painting really acts as an abstract trompe-l’oeil: it seems at first that the painted colour rectangles are projected and go over the edges of the canvas. But as the viewer carefully observes the work, it appears that additional surfaces complete the original canvas and create depth and relief. The assimilation of painted colour with projected colour goes even further with the play on overlapping and additive mixing of primary colours to create secondary ones, but also the sum of them all, the white colour. Obviously, these chromatic results cannot be applied to painted colour, as the mixing of blue, green and red paint does not give white, but a dark brownish tone. Johanna BINDER created a work that addresses and challenges spatial and chromatic perception as well as our knowledge of physical and chemical laws and causes of colour. 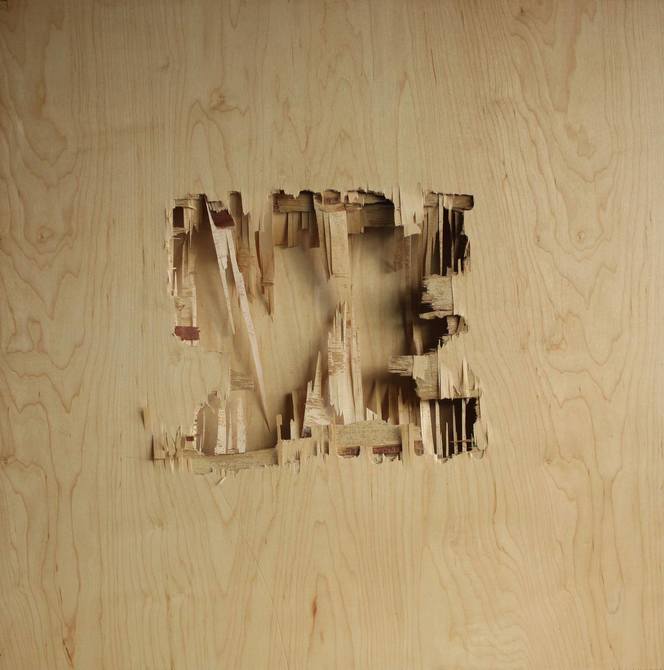 Born in 1986 in Mexico, Karian AMAYA attended the Universidad de Guadalajara School of Visual Arts. She currently lives and works in New York. In her artistic practice, Karian uses various media, ranging from sculpture and drawing to photography and installation. Her work often deals with the human sphere, especially by exploring the relations and division between being, intimacy and identity.

Things I Wish I’d Said (2012) is a unique piece, exclusively composed of wood. The viewer faces a wooden screen that has been broken in, revealing another undamaged screen behind it. Plastically speaking, the violent transgression and dismantling of a seemingly two-dimensional surface therefore unveils a three-dimensional space. From a metaphoric point of view, the treatment applied ot the material is referring to our own bodily and emotional existence, states, situations. The fracture of this rigid material makes its structure, veins and tissue appear, showing delicate and flexible fragments. The splinters symbolize our apparent strength and solidity and our real fragility and vulnerability, in both physical and psychic meanings. But it is exactly the contour of the hole itself, the splinters drawing a strange urban landscape, which gives to the work its esthetical value.

Regarding the title of the piece, Things I Wish I’d Said evokes the regret occurring from restrained words, the violent frustration coming from things which are left unsaid, but also the catharsis that takes place when they are finally uttered. In Karian AMAYA’s work, a further parallel can be identified between action and speech: in spite of their swiftness, a (violent) act, reaction or word leave permanent marks. These traces, signs, or remains – no matter how long they have been there – act as shaping forces of our inner and outer landscapes.

Born in Poland in 1986, Weronika TROJANSKA studied at the Academy of Fine Arts in Poznan, where she obtained a Master of Fine Arts in art criticism and art promotion in 2010. She spent one academic year at the Universitatae Nationala de Arte in Bucharest as an exchange student in fine arts. She currently lives and works in Amsterdam both as artist and art critic.

In her artistic approach, she intertwines theoretical interests, curatorial and critical research as well as practice itself, touches to art, sociology, psychology and history and focuses on the relations between fact and fiction, history and invention, biography and narration.

Universum Urania (2011) is a series of seventeen collages and drawings combining image and text. The artists used vintage paper and old images, mainly from German second-hand books and magazines published before the fall of the Berlin wall. The delicate works form a diary of ideas and imagination developing into fantastic, futuristic, utopian but at the same time slightly eerie images of non existing places, facts and scenes. The uneasy feeling is accentuated by the textual insert, generally a comment referring not only to the scene depicted, but to larger, global historical, political or social contexts. These reflexions are usually typewritten and therefore being of scientific distance. The reference to manipulated archives addresses the viewer’s imagination in both spheres of fear and desire. Combined with the emotional distance emanating from the typewritten text, it acts as an inner mirror of humanity by exploring the origins of crisis, conflicts and wars and how the fantastic and utopian imaginary and ideology can switch to horror or create a monster. In short, Weronika TROJANSKA’s works dive deep in the abyss that separates political and scientific ideas, ideals and theories from their application and practice. 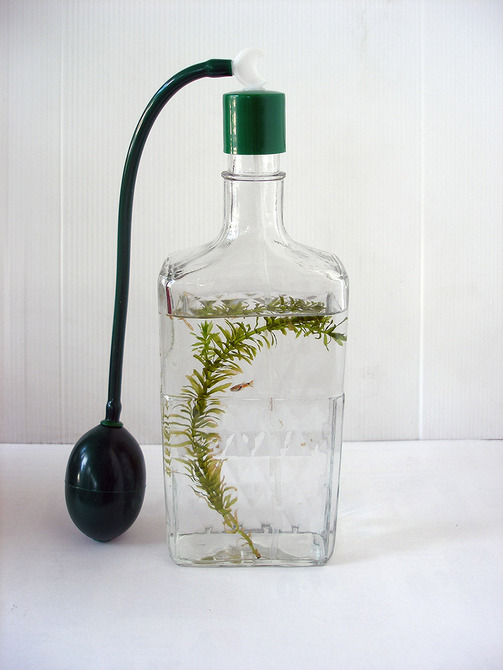 Enrico BERNARDIS was born in 1983 in Italy. From 2003 to 2007, he attended the Accademia di Belle Arti in Venice then pursued his studies at the Accademia di Belle Arti di Brera in Milano, where he gained a Master degree in product design. In his artistic practice Enrico BERNARDIS keeps a focus on the production of functional objects, which he fills with fantastical and imaginary content, inspired by literature or everyday life. In the natural reference to product-consumer relationship of these objects, the artist inscribes functional contradictions and paradoxes which trigger the viewer’s imagination.

The artist realized the piece entitled Channel (2011) in the frame of a workshop organized around the theme of nature and the possible meanings of this word. A transparent glass bottle acts as an aquarium and is hosting a miniature living ecosystem: some clear water, an aquatic plant and a tiny fish. But the viewer’s attention is swiftly caught by the spray nozzle mounted on the bottleneck and its suggested meaning: if someone uses the spray, the living space for the organisms inside the bottle slowly shrinks. The message is extremely clear and powerful: it is the viewer’s choice and responsibility to preserve the artwork, and by extension, man’s duty to maintain the balance of nature. Confronting the public’s conscience, ethical sense and self-control, Channel also conveys the ideas of potential destruction, inherent fragility on one hand, fundamental hope and possible harmony on the other. Furthermore, in its original version, the piece was composed of two similar bottles, each one containing only one fish, one male and one female. This mirroring installation added further layers of meaning to the problem tackled by the one bottle variant by reflecting on existential questions, especially on our human condition and on the paradox of our self-generated isolation and loneliness.