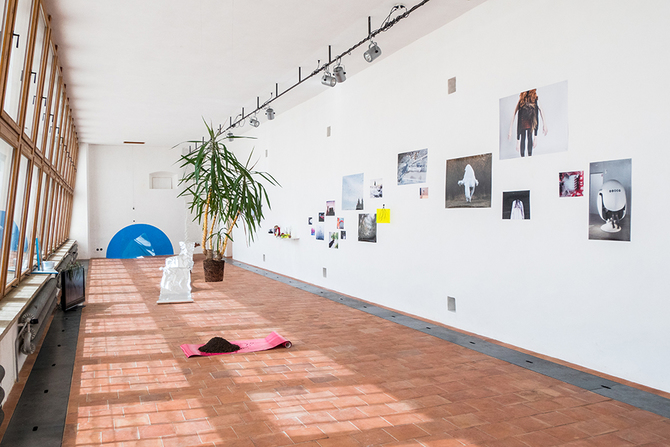 She paused to think for a moment. What was it that Radim wanted from her? She rubbed her eye with her index finger. Oh, yes, she will have to write a column instead of Karel for the next issue. She had better put that in her diary or else she will surely forget… She propped up her chin with the closed palm of her hand and looked out of the window. It is still raining. Everything looks blurred and liquid through the raindrops on the glass. Trrrrrrrrrrrr! The tram driver rings to warn the careless driver turning from the left. Perhaps it was time to have the tyres changed. It is almost April already but there are still heaps of dirty trampled snow lying along the shoulders of the roads. She didn’t even manage to go skiing this year although it was finally a proper winter after so many years. The sky is as grey as steel. Four more stops. God, if only there was sunshine again. She closed her eyes. She will take the kids to the Zoo when it gets warmer. And she will finally take the coat to the dry cleaners. The tram is so overheated. She lost consciousness. Micro-sleep? No, just one more stop to go. The woman next to her turned the page of a magazine. The title promises to help you “Get rid of springtime lethargy”. I will probably need to have a little nap before dinner, she thought and pressed the door open button.

A sharp blade of dry grass stabbed her in the neck so she propped herself up on her elbows and narrowed her eyes. The light is so sharp that she needs to shield her eyes with her palm to be able to look around. Some pickers further off are working again, but Fred and Emma are still digesting, leaning against a tree trunk. The sun seems to be still at its zenith but it must have moved on a little because the plate from lunch, which had just a moment ago been in the shade with her, was now partly in the sun. She sat up, stretched and yawned heavily. They have been in the orchard since six in the morning and there was still the afternoon shift ahead of them. She tilted her head to her left shoulder, then to the right, and there was a snap between her vertebras. Her back already hurts. Working in this heat is exhausting, and after lunch the fatigue mixes with dullness. The cicadas are screaming. Even vegetation is weary from the heat. The soil is dry and a solitary sunflower nearby does not even turn to the sun anymore but looks gloomily to the ground, the leaves lowered to the stalk in a gesture of resignation. Oh, Fred is getting up, so must I. She stood up so quick that she felt dizzy.

Come on, I had it saved here… She shut her eyes tightly and pressed the bridge of her nose with her thumb and index finger. It is late, she must finish the accounts. This is where that invoice was supposed to be, damn it. I haven’t deleted it by mistake, have I?! Oh dear, now I will have to search the emails. With a key on the keyboard she lowered the brightness of the screen by several degrees. She is really tired. But she would not be able to fall asleep now anyway, thoughts are running around in her head – hopefully, she filled in the allowances correctly. It is mainly the eyes that are ceasing to work – staring into the screen is simply exhausting. Her near sight is still good but working at a computer must be deforming her sight, she should already wear glasses for the distance. Unintentionally she pulled out the charge cord from the laptop and she felt a gentle sting inside the scull somewhere near the top of the forehead. Of course, here’s the stupid invoice! She brushed off the tiny specks of dirt between the keys. Oh well, I’ll fetch the eye drops or I’ll actually drop off.

This text are not the “directions” for how to read the exhibition of Markéta Magidová. It is affected by the associations provoked by some elements of the exhibition, the motif of tiredness together with the motif of impaired (blurred) vision that brought about the current title. The individual depictions and objects at the exhibition can undoubtedly be perceived as metaphors of a kind. The concept of live metaphor is what Markéta Magidová studies as part of her doctoral studies at the Faculty of Arts, Charles University (FF UK). In this institutional environment, too, the liveliness and élan of research work transform instead into some sort of agony, mainly when considering the increasing necessity to complete the studies or make personal and professional life fit together. But how to refer to the visual metaphor without killing or crippling it? The three scenes described above relate to the exhibition on the principle of mirroring and evocation, it is an attempt at a textual extension of the installation in space rather than its summary. And finally, since the text has freed itself from the urge to explain the exhibition, it at least explains itself.

Markéta Magidová (1984) is an intermedia artist who works mainly with the medium of video, photography, performance and text. She is concerned with the imbalance in social relationships, the reverse side of the ever increasing demand for productivity, the space between reality and imagination. She graduated from UMPRUM, FaVU VUT in Brno and FMK UTB in Zlín and is currently completing her doctoral studies at FF UK. Markéta Magidová has had solo exhibitions in FAIT gallery and TIC in Brno, in Prague galleries Meetfactory, SPZ, INI gallery, 35m2, AVU gallery, Pavilon, in Nitrianská gallery, etc. She has participated in a number of international and Czech festivals and exhibitions (National Gallery in Skopje, International Performance Festival in Sofia, Youth Biennale in Moscow, International Literary Festival in Krakow, Alternative Theatrical Expression Festival in Zagreb, Lisbon Architectonic Triennale, 4 + 4 Days in Motion, PLATO gallery Ostrava, Other Visions PAF, and others). She is the author of three books (Domácí slovník, Překlad, Překlapy a přehmaty). Překlapy a přehmaty was dramatized by director Katharina Schmitt as part of Hry nové generace on radio ČRO3-Vltava (2016). The author has been to several creative residencies – literary in Bratislava and artistic at Egon Schiele Centre in Český Krumlov and in CEAAC gallery in Strasbourg.