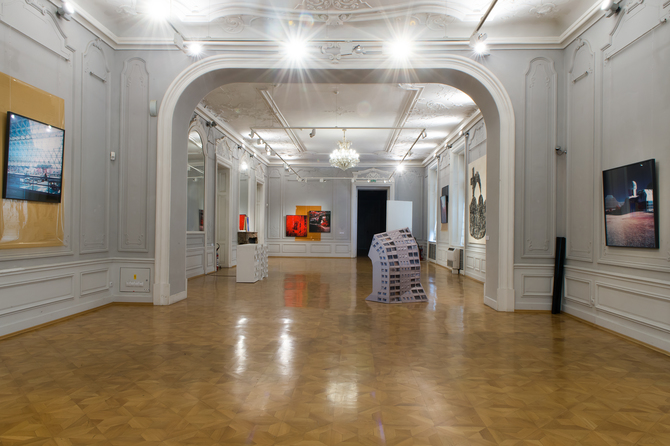 The exhibition ERRORS OF BEAUTY: Contemporary Austrian Art in Sofia provokes us to try and formulate what is “Austrian” and translate this into an intelligible international language. It is difficult to find a single unequivocal image to represent a country internationally.

In this respect, Andreas Fogarasi’s video Europa, which plays with the tourist logos of various European countries, examines the attempts of nation states to brand their identity with the contemporary, corporate visual language.

What does “national” mean when applied to contemporary art?

But if, nonetheless, we insist on delineating the Austrian cultural space, we would undoubtedly have to think historically and politically.

If we choose to think historically, we will see that historical facts are often intertwined with a number of conflicting mythologies that stem from collective traumas. From the time of the Austro-Hungarian Empire, where the notion of “Austrian” had no autonomous meaning, through the events of 1938 and Austria’s subsequent labeling as “Hitler’s first victim”, to the renunciation of this doctrine after the Waldheim Affair, such changing mythologies are bound to have produced a conflicted national identity.

Today, Austria is seen as a rich, prosperous and attractive country with an enviable social policy. Yet the generations influenced by the work of Thomas Bernhard have been profoundly shaken by his insistence that Austria is rife with meanness and hypocrisy.

Such а traumatic, dualistic and mythological foundation has had its undoubted effect on the phenomenology of Austrian contemporary art. Its discourse often draws strength from conscientious political and social analysis, and acute self-criticism.

Such social commentary is abundantly present in Bernd Oppl’s Crooked Buiding, a deformed object inspired by a Viennese piece of municipal housing built by economic migrants who were then denied residential access to it because they are not yet part of the country’s social security system.

Another characteristic duality in Austrian cultural policy is an uncertainty about how much emphasis to place on the classical past and how much to look forward to the future, as is evident in Katharina Swoboda’s video Bisamberg, documenting the demolition of Austria ’s tallest building, Vienna ’s disused TV Tower. The video is a nostalgic farewell to the analog era and an optimistic welcome of the digital future.

The question is whether the old East-West dichotomy can explain and exhaust our reality today. In a frightened Europe and increasingly insecure world, dominated by new geopolitical interests and conflicts, we all aware that neither the West, nor the East are as we once knew them. New relationships and oppositions are shaking up our present.

This confusing complexity often leads us to anti-utopian visions of the yet obscure post-industrial and post-technological society, such as in Markus Krottendorfer’s photographic series Biosphere and McMath-Pierce Solar Telescope.

Paradoxically, these visions are frightening but at the same time - beautiful.

Olivier Hölzl's installation Salonfähig creates another kind of beauty - a "decoration" for wall plates. At first glance the ornaments on these plates are bizarre but the inspiration for this “home beauty” comes from symbols of far-rightist brotherhoods.

Historically, beauty is а fundamental theme in the Austrian cultural tradition. A very recent example is the motto of this year’s Vienna Art Week: Seeking Beauty. But to understand beauty fully today we must also use the language of contemporary art.

In this respect, the exhibition ERRORS OF BEAUTY explores some of the bugs, gaps and errors in beauty’s DNA.