The last show in the Výklad gallery this year presents the sculptor Miro Trubač on 19 December.
His installation Disturbia is a reference to the traditional religious symbolism of the first people living in the ideal environment of the Garden of Eden. The artist uses familiar elements to refer to the present abounding in communication technologies offering their users the possibilities of creating their own perfect virtual worlds, through which they present themself and the chosen can join. Communication becomes a simple confrontation, a superficial escape into a conflict-free illusory world full of different disturbing temptations in the form of increasingly sophisticated marketing strategies. 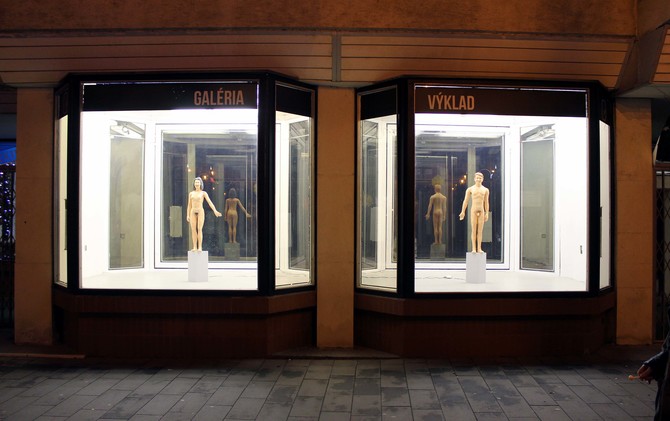 The minimalist intervention (in quantitative terms, not in terms of simplification to elementary forms) representing two human figures, each placed in one shop window, reflects the present (not in terms of the coming festive days), drawing on popular religious symbolism. However, the artist does not aim to render the well-known scene, but attempts to raise questions related to communication, contacts and self-presentation in the period of their virtualisation, social networks and technological innovations.

By placing Adam and Eve in shop windows, naked as in the ideal environment of the Garden of Eden, the artist literally refers to the exposure to admiration, as is the case of different users of the social media. Maybe they unconsciously, driven by a narcissistic desire for recognition and popularity, share information about their life, make their photos and videos public, create an illusory world of happiness similar to the Garden of Eden, where you can receive or remove the chosen. However, it is nakedness in another sense, while all the responses and interactivity of users are monitored by the information technology companies and processed by sophisticated algorithms on the basis of which we can see information and responses and are exposed to an increasingly amount of seemingly tailored advertising.

The gesture indicating a mutual contact of the two figures is not fulfilled because they are separated by the barrier of the architectural space. This contact is only an illusion, however, both figures with a happy expression are only seemingly absorbed in one another and the gesture reverberates in empty space. Their relationship, interaction or confrontation is eliminated and limited to their own comfortable realm of the world where we can share experiences and feelings, but only if we want to. All interference can be filtered out and we can surround ourselves by the unobtrusive, friendly and non-confrontational. Moreover, technological innovations in the form of ever more powerful devices allow us to keep permanently in touch and fundamentally change our physical communication into a tangle of interactions with many participants in an almost identical time and occupy our attention rather than spend the time with those in our company.

At first sight the realistically rendered naked bodies can interfere with this area, but much more disturbing is the reality in which the public space becomes increasingly fragmented and emptied, its participants withdrawn into bubbles promising seeming prestige or popularity and the platform of sharing is just another means of technocrats accumulating revenues from increasingly sophisticated marketing strategies. Everything becomes superficial and things dissolve in a flood of new sensations capturing our attention, as ephemeral as the flight of a butterfly.