Apparatus for a Utopian Image

Creating, sharing and spreading images has become the most common means of communication since the 1990s. With the arrival of social media, the image has also become the most widespread means of confirming one’s existence. Almost everything is documented and recorded, mostly in several versions. The role of the image as a tool of understanding the world has changed. Nowadays, it is rather necessary to understand the image in order to understand the world. We consider the search for an apparatus for the interpretation of existing images to be one of the crucial tasks of early 21st century art. 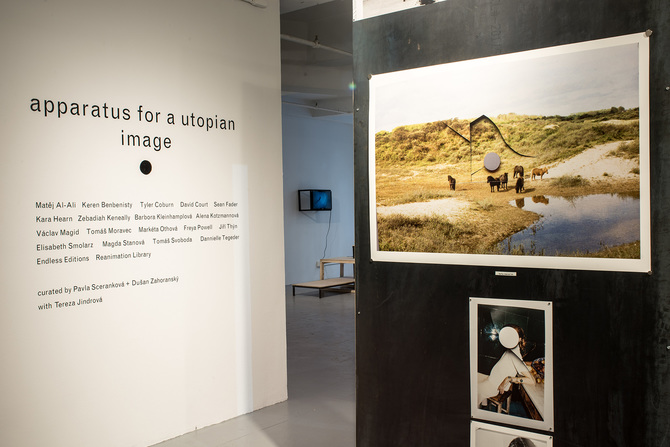 Our goal is to initiate a creative dialog about the possibilities of creating an apparatus that will help us really see and understand the images that surround us. We want to hold this dialog on several levels. The first is through the curatorial concept which is articulated through the architectonic solution of the installation of the artworks on display selected from Czech artists. Through this, we introduce the specific aspects of working with the image in the Czech environment to New York audiences, challenging local participating artists and viewers to consider how and why the Czech approach to the image may differ, even in the slightest nuances, and what revelations may come from these observations.

Through a special architectonic concept for the installation of the artwork, we initiate a play that intends to blur the hierarchy between an artistic gesture and the viewers’ response, leading to a creative dialog between the exhibited artifacts, participating artists and the audience. At the same time, we hope this becomes a platform for networking and exchange of ideas between Czech artists and artists from the New York art community. The open, fluid architectonic design offers different scenarios that enable the participating artists and visitors to become responsive and actively engaged, calling up their own ideas and images.

The initial artworks from nine Czech artists were selected according to the clue of a “fragmentary image” – an ability to attract attention by their allusive but not fully expressed meaning. This constitutes the starting point of the exhibition. Next, in collaboration with EFA’s curatorial team, we invited nine New York based artists to respond to this initial gesture. The selection of the local artists involved a long, dynamic process where we spun around the idea of creating mental “couples”. The result shows evidence of a nearness on various levels between the groupings of artists, not as “one to one” model, but rather as a principle within the larger whole.

The local artists will introduce their contributions, in stages, after the opening of the exhibition. While the spatial solution of the installation presents a framework and a certain key for their intervenion, it remains open and without any predetermined plan until each of the artists react and change the status quo. We expect these responses to bring new themes and to shift the original meaning of the artworks. The new context will again be commented on by Czech artists who will be present towards the end of the exhibition.

Another level of dialog will be realized with the viewers who are invited to physically intervene in the structure of the exhibition with various points of entry within the specific platform. We imagine that the visitors will create a sort of an open mental map that will reveal new contexts and show unexpected shifts in perception. The participating artists and viewers can remodel the exhibition throughout its duration and enter in mutual relations with the artworks. At the same time, the structure of the architectonic solution represents a script that gives the interaction a suggested direction.

We allude to Aby Warburg’s Mnemosyne Atlas, an idea of a visual atlas organizing human imagination in meaningful, mutually interconnected units. This monumental, utopian plan could never be fully realized, however, the persistence with which we surround ourselves with images, filling them with hope that they will give meaning and legitimacy to our world, proves the importance of the role of images, or a certain form of a visual atlas, in our lives.

Understanding the meaning of images with which we surround ourselves and with which others surround themselves brings a better understanding of each other. We hope that the prepared scenarios for particpation will show the viewers how context and mutual relations influence the meaning and message of individual images. Rather than devising a 15th theme for Warburg’s unfinished atlas, we would like to awaken the Warburgs among the visitors.