A School of Gestures

In Beijing, 17 Czech contemporary artists will present their visions on the notion of “Monument”.
This word doesn’t only stand for a conceptual category; Monument was also a subtitle for an Intermedia Art Studio led by the artist Jiří Příhoda at the Fine Arts Academy in Prague from 2005
to 2015. This exhibition brings together his selected graduates and students, many of which
already gained substantial recognition within the Czech and international art scene. Despite the
contemporaneity’s skepticism on the account of “schools” or “movements” in a traditional sense,
this group of artists represents a current of distinctive personalities rethinking the notion of monumentality in terms of profound, but possibly ephemeral gestures, scope of their research,
nuances of craft and scale, or the imprints of immateriality. 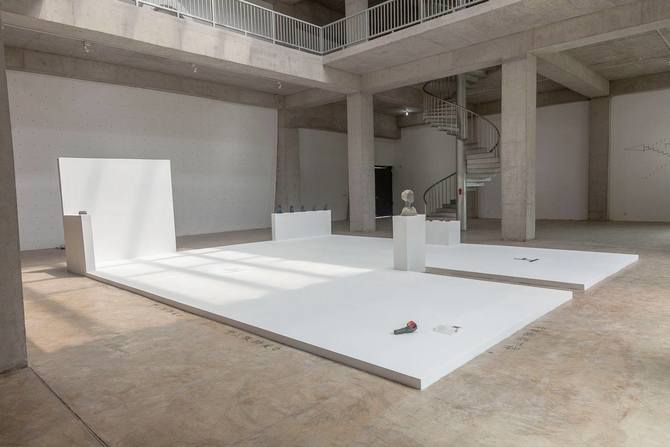 Monumentality is a category connected with the arts from antiquity, or perhaps (if we consider for
instance menhirs as works of art) even from prehistoric times. We admire the Egyptian pyramids,
Colossus of Rhodes, or other so called wonders of the words not only for their technical and artistic
quality; it is the very essence and transcendental nature of “monumentality”, that fascinates us.
In medieval times, monumentality gained a spiritual dimension, climaxing in gothic cathedrals.
Monumentality as well as its cousin, generosity, might also be characterized by abundance and
extreme decorativeness embodied in baroque palaces, the essence of which is perhaps best
demonstrated in Versailles. The Romantics connected monumentality with sublimity; historical
painting not only contemplated the scale of the canvas, but also the grandiose content of the
works. The French Revolution gave birth to utopian visions and monuments of the spirit, the 19th
century nationalistic movements across Europe used monuments to expose collective memory.
The avant-garde contemplated monumentality not only in terms of the artistic form, but also in
regards to inventive visions connecting art, society, and life. For the post-war American art, monumentality became a symbol for emancipation, firstly from the Eurocentric art history, and
secondly from the limits of the gallery or museum spaces. A turn towards conceptual art and performance revealed yet another dimensions of monumentality, exploring new paths through the
artists mind and through (and beyond) the borders of the field itself.

Of course monumentality in non-western contexts is yet another story, of artistic styles lasting
through millennia while embodying thousands of nuances, of politically or socially engaged gestures
the echo of which circulates around the world, of both the most ancient and the most progressive.
This exhibition attempts to take bits and pieces from the tradition and the current state of things, in order to show monumentality as a discursive field. There will be no large-scale pieces attacking the viewer’s attention at the first glance. The exhibition will rather be formed from diverse gestures – some of them quite immaterial – drawing attention to the accelerating scope of human action in the virtual and environmental space, as well as reassessing the spiritual visions of the past, embodied in newly appropriated ritualistic artifacts. Some of the works will draw attention to historical art and architectonic movements, questioning the reach of their grandiosity as well as transferability to both a more present and distant context. Connected through an architectonic solution of Jiří Příhoda, who himself is one of the most notable Czech contemporary artists, the exhibition as a whole will attempt to investigate whether in a world that cannot avoid skepticism and fails to find any win-win solutions, there is still space for a multiplicity of profound gestures, which, altogether, may form something as a monument of today.