Igor Hosnedl (1988) studied at the Academy of Fine Arts in Prague in the Studio of Drawing led by Jitka Svobodova and he graduated in 2013 from the Studio of Painting led by Vladimír Skrepl. It is precisely drawing and painting that remain in equal positions in his work, which is characteristic for examining the relationship between portrayal, abstraction, symbolism and script. Hosnedl has a masterful command of both black and white drawing with charcoal or ink, as well as colourful painting for which he has developed a special technique based on mixing colours from ground pastels and applying them on canvas using untraditional methods including hand painting. Following his experiments with wooden, coloured statues, he comes with new means of expression in his existing exhibition in the Jelení Gallery which consists of drawings and paintings transferred into space in a way that the viewer practically becomes part of the painting – between its individual layers that he/she only suspects are on the canvas. 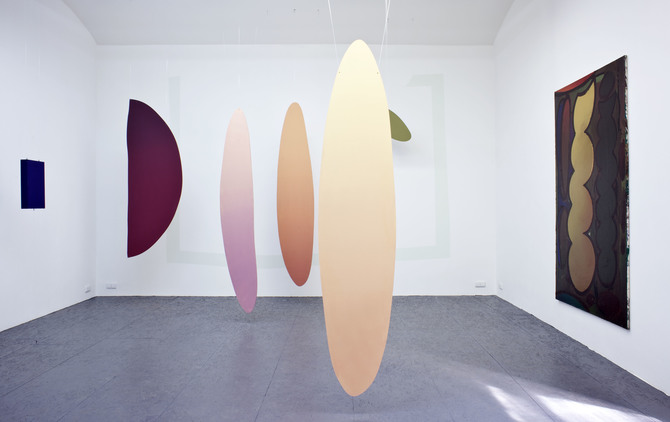 How would you characterize your process when working on paintings?
Igor Hosnedl: The process of origin of my paintings is initially based on some sort of shapelessness where the most important thing is a certain sense of colour. During the process there are also some chances and diversions that may eventually lead to the final result or they are, on the contrary, covered with other layers and make up a sort of base. While working on my paintings I simultaneously draw a lot and the painting gets a concrete form thanks to these drawings.

The actual painting consists of many different technical processes serving the purpose of constructional elements. Important for me are large coloured areas and colour transitions, during which I draw inspiration more or less from classical sources such as Morandi and his interpretation of still life. For me the intensification of colours is exactly a reaction to the function of light in still life.

In this exhibition you are presenting books of drawings – I have intentionally not used the words sketch books, because I don’t perceive them in the sense of some preparation studies. Do you want the viewer to have a clearer idea about the process of your work or do these drawing books represent a full-fledged artistic artefact that can function on its own? In essence, what does the relationship between drawing and painting mean to you – is there a certain hierarchy here?
Actually, no. There is no superiority between individual positions, but in the case of drawings there exist some sort of impressions thanks to which a person realizes the root of a problem. Drawings should be some sort of immediate reflection of thinking, but where gesture is concerned, drawings and paintings are on the same level for me, although in the latter it is only large formats. Drawings, therefore, do not represent a final concept for paintings and I need to have the same principle of chance in paintings as in drawings. I try to feel the same level of spontaneity when I’m drawing as when I’m painting. You could say that painting is in a certain sense an expression of the stopping at a certain moment in drawing – in the place where the drawing can continue on. Strictly speaking though, I follow similar principles in drawing as in painting, which concerns, for example, the multiplication of curved lines that are layered and create more and more groupings developing the initial motif.

At the same time my drawing process is based on working in blocks where the drawings are printed, or rather drawn and pressed on the following sheets. Therefore the drawing books are of the same importance to me as large paintings and it’s probably absolutely unthinkable for me that some page from that book should be removed. For me it would be unnatural even in this context to draw on individual papers, because what the essential thing here is a certain sequence, as well as the impossibility to erase or skip something. When I work on the book I experience the most intense awareness of my relationship to painting.

I would like to come back to your painting technique. What led you to use ground pastels with a biding agent as the painting colour mass as opposed to traditional agents such as acrylic or oil paint?
Working with pigment and glue bears certain unpredictability because considering the nature of this technique, it is never 100% clear how the material will react. I enjoy, for example, haptic perceptions that this technique provides me, because sometimes the binding agent retains larger pieces of pastel, which creates the layering of the material and the painting gains greater density, almost like an embossment. At the same time, this technique brings an amazing colourfulness and luminosity of colours. I personally have a strong relationship with the classical functions of a painting and the use of pastels enables me to fulfil my deep, almost obsessive desires to create large coloured areas, distinct shades and colourful transitions. And I was not able to do that with any other technique before – whether it was acrylic or oil paint.

For a long time your work has been showing the motif of a symbol – sometimes as a reduced reference to objects, sometimes in an almost graphical or typographical sense. What do you follow with that?
I deduce all abstract shapes and symbols from reality, or images, what a certain object in the painting means and what it should represent, therefore the viewer is led to a certain reading.

I have been interested in letters for a long time now – in my past work I used to connect literary motives with image stylization of shapes similar to letters. Graphical form is essential for me in the sense that it can be a substitute of real clues – real portrayal.

Your exhibition in Gallery Jeleni has a very complex arrangement including various plans and ways of viewing. Therefore, it is not a traditional painting exhibition, but a certain model of a creative universe. In this sense, is the exhibition as a whole more important to you than an individual painting?
The creation of a painting is in itself extremely romantic considering how this medium alone is encumbered. However, I personally do not place so much of an emphasis on individual paintings as on the final artefact, and the perception of one canvas is for me connected with the greater whole of what preceded that given painting or what comes after it.

And I hope such a collection that offers a wider view of various components of the artist’s work, is interesting also for the viewer. An actual painting about what happens during the process of creation cannot tell everything, and that is why there are also other media and other means of expression here. After all, even when I paint I work with large series’ out which I later choose a smaller portion and push aside or eliminate the greater portion so that it may not even be seen by the public – it does not make it to an exhibition, but without that majority this selection would not be possible.

In essence, the installation of the exhibition becomes another phase of the creation. This time, thanks to the exhibition, I went back to drawings and I transferred them to the space in multiply enlarged dimensions, so they look almost monumental to the viewer. Therefore, the viewer has a small drawing to look at, as well as the spatial installation in which he/she can physically move.

What led you to shift your drawings and paintings into space?
Since my drawings are black and white, my initial idea was to transfer the drawings into a large installation consisting only of lines – possibly from wire. Basically I wanted to draw a line in space.

I eventually decided to go with a more direct process by creating the drawing on a flat surface and having the given shapes cut out according to the outlines. I consider it to be a test of other possibilities of developing drawing and in the future it will probably be necessary for me to occasionally verify certain questions or problems arising during my daily work in the studio.

The exhibition as a whole represents a certain type of a guide for me how to proceed further, because the exhibition itself is actually a specific medium.

How did you arrive at the chosen title of the exhibition? Does it have a symbolic meaning?
Originally I considered various descriptive and technical titles, but then I decided to go with a somewhat confusing title, which is not directly tied to the exhibited works but to what I was thinking about during my work or what influenced me on a subconscious level – like the place in the title. Therefore, the title of the exhibition makes a reference to somewhere deeper in the process of creation, which begins already with my thoughts alone or with the mood I’m in when I approach the piece of paper or canvas…