One day mother baked a cake, put it in a basket together with a bottle of wine and said: “Come, Little Red Riding Hood, take this basket to your grandmother, she is ill and weak, and they will do her good. Set out before it gets hot, and when you are going, walk nicely and quietly and do not run off the path.” Little Red Riding Hood nodded her head and set out… 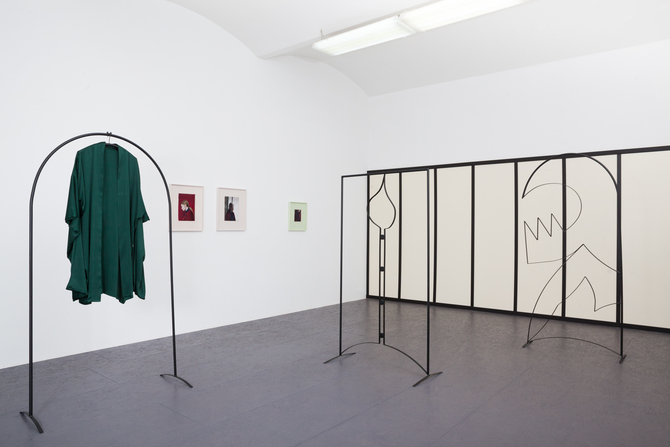 In the most recent years, Klára Hosnedlová has come a long way in her work. From large canvases quilted with geometric raster and covered with a layer of paint to damascened embroidery of cabinet format; from black monotints to delicate coloured compositions; from paintings sewn into original dresses to classical frames. The list and conception of themes, which Hosnedlová pursues are also going through development: she advanced from images copied from film and foreign photographs to making her own photographic models in cooperation with professional photographers. Individual portraits of acquaintances and friends were gradually replaced by focused and intensive work with one model. The result are comprehensive cycles, as is the case of the scenes of interiors designed with Loose in the Vogel’s flat in Plzen or the case of the current exhibition in the Gallery Jelení, which is inspired by the home where Josef Hoffmann was born in Brtnice. For both of these projects, Klára Hosnedlová approached photographer Lucia Scerankova, and Igor Hosnedl took care of the architectonic design.

Klára moves masterfully on the field of intermedia, while she continues to reveal her painting foundations, which she constantly draws from. On one hand she sort of works like a director who selects the scene as well as actors, decides on the backdrops and accessories and she confidently works in a team of other artists whom she leads to the implementation of her vision. At the same time, however, she maintains her relationship to material and her own handwork, when she takes the transformation of a photographic model to embroidery with her precision practically to perfection.

This time Klára focused her interest in modernistic architecture on the villa of architect Hoffmann in Brtnice, the interiors, patio and gazebo of which became the setting for the delicate and volatile apparition of the fairytale character – Little Red Riding Hood.

The reminiscence of the classical Grimm fairytale does not need to be overrated. One of the spatial drawings can resemble the hungry wolf, with a little fantasy the green kimono evokes the woods, the fearless huntsman or grandma’s house robe. Klára, however, was not led by the attempt to illustrate a story for children. The exhibition in the Gallery Jelení is rather a cohesive whole, which should be perceived in its completeness, rather than reduce it to one shared narrative.

The light playfulness and even the hint of humour are balanced out here by the fragility and seriousness, and by certain sadness, which is built in the expression of the young model. Red Riding Hood says good-bye to her parents and alone enters the dark woods, which conceal many traps. The girl in the red hood slowly sets off from childhood to the time of adolescence.

In her portraits, Klára Hosnedlová does not only show the surface of beautiful faces, but she also depicts intimate psychological moments, as a result of which the final paintings are attractive and touching at the same time.