The work of the two artists Nicole Morris and Miroslava Večeřová is characterized by its multi-layered nature and shares a number of common aspects – the way they employ video in combination with installations, objects and performances or the specific corporeality inherent in the visuality or impact of many of their works. While their joint project for the National Gallery in Prague is based on a presentation of individual works, it stems from an intensive dialogue between the two artists. The videos that form the core of the multimedia presentation may be perceived as poems in the medium of the moving image – poems about touch, transformation, growing up, the sea, plaster, chalk, light, shade as well as many unnameable things. 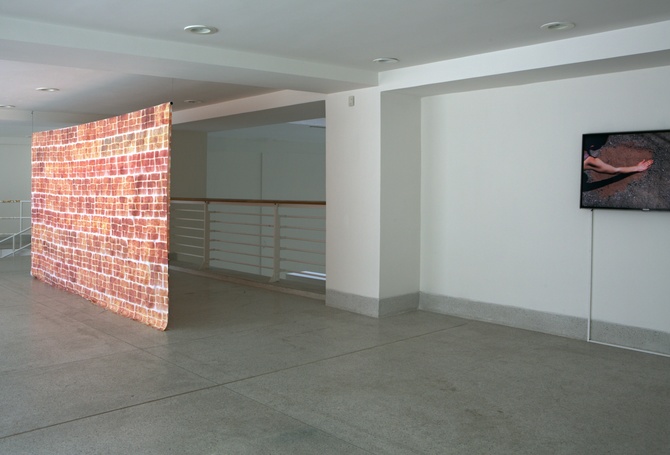 A sense of inappropriateness – a feeling that most of us would have if we happened to find a cave among the cliffs on a walk along the shore, where two young lovers are hiding.    A cold drop of sweat trickled down the inner side of her arm.   The exhibition entitled The Girlfriend operates with a multi-layered sense of inappropriateness; it is somewhat inappropriate in the exhibition cycle itself, which has always presented only a single artist.
We feel inappropriate whenever we are anywhere we should not be. But what if somebody else undertakes this experience for us? Under usual circumstances, it is not appropriate to watch intimate moments of others – is it not even stranger to watch somebody else in the role of voyeur?
Even what is absurd is inappropriate, in a way. But when we perform an activity with a seemingly practical purpose, it is obvious that the chosen way of doing it is not effective to achieve a practical goal.    She bit into a sandwich, and as soon as she began to chew, a grain of sand stuck in her teeth.   We tend to see such activity as naïve, foolish or childish. To fill holes on a smooth road is reminiscent of children playing in a sandbox. Just as white gravel before it, nor will yellow sand resolve the problem of an uneven road; it will be scattered all around. But the child does not care if his or her sand pie is going to crumble – they press the sand firmly into the form and as soon as they remove it, it becomes a real castle or real cake for the dolls.
Of course, it is inappropriate to connect what does not belong together. To fill the holes on a dark road with light sand is conspicuous, but it cannot rival the vanity of the connection of a trowel with caramel. The merger of these two materials is inappropriate, yet similarly (un)coincidental like the famous encounter of the umbrella with a typewriter.
The process of re-mediation and intermedialization, too, generally bears a certain inappropriateness – media permeate one another, one depicting another. Painting on canvas is replaced with the graphic technique transforming a pattern into a textile design, which is a depiction of an architectural motif also serving as an architectural element in the space.    She removed dirt from behind the nail with the thumb of her other hand.   The movement captured in a video, which could be seen as a performance bordering on daily routine suggests by its title, Road Coloring, that it is not only a parody of the effective solution of a pragmatic task, but also a flirtation with the painting qualities of the resulting pictures.    She heard the buzzing of a mosquito close to her ear and immediately felt an itch all over her body.    The video hidden in one’s pocket, which could be seen through the screen of fabric, is captured in a photograph serving as material for a poster. One medium becomes the theme of another. The video called Transfer seems to show us an artistic installation of objects, drawings and variable foreground and background layers. The alternating scenes and the play of light are reminiscent of theatre stage design. And, finally, our sensory reactions when we absorb tactile associations through sight and hearing, or when we almost feel a taste in our mouth as we smell something familiar, can also be inappropriate.   The elevator began to move and her stomach jumped.    The work of Nicole Morris and Miroslava Večeřová is similar in using simple, often slightly ironic images, which nevertheless have a powerful sensory and associative potential. Even through abstraction, they evoke physical feelings and emotions, which are often ambivalent and, consequently, also inappropriate – we do not know precisely where they belong.    She felt that a hair had become stuck to the tip of her tongue.   Art is often a deep well of inappropriateness and of many of its shades and facets, which are all the more inappropriate because we do not find fitting names for them, so they are beyond the power of words and therefore also rationality. That is also why so many people feel inappropriate in the presence of contemporary art. But we want to reassure such exhibition visitors – if you feel inappropriate in any way, it is the appropriate feeling. Try to enjoy it.