BIENNIAL OF PHOTOGRAPHY AND VISUAL ART LIEGE 2014, LIÉGE (BE)

The exhibition project titled About the Chair presents works by over 30 emerging and established artists working within and beyond the contemporary Czech art scene. A leitmotiv and key to the exhibition's logic is an image of the chair, represented in photographs, installations, performances, videos and other media. This simple, yet multi-layered object somewhat counterweights and yet corresponds to this year's theme of the BIP Liege, Pixels of Paradise. The chair is down to earth. It stands for temporality as well as solid foundation. When multiplied, it creates space for communication, discourse and community. In its form, it is both unique and universal. This exhibition intends to explore the basic element of the chair excerpted from the commonplace and perceived by artists from various viewpoints, in its material and transcendental dimensions. 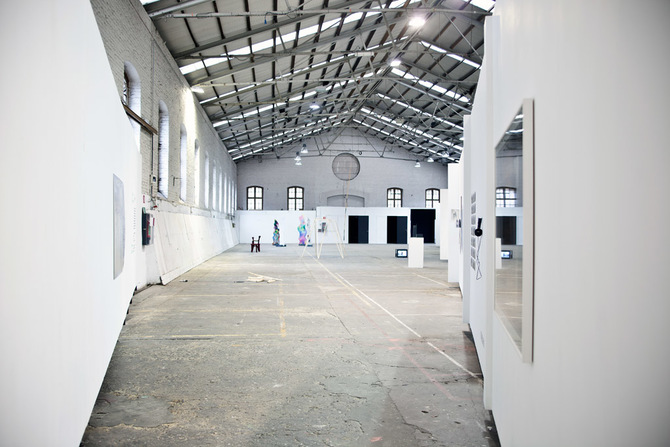 
Our curatorial approach was driven by the attempt to overcome some limits of exhibitions set to map certain art scenes, nationalities or artistic media. We tried to avoid the - by definition ideological or misleading - notion of objectivity and confirmation of existing relations or established values. We have decided to build this presentation from the very ground, using the selected key to allow for systematic, but at the same time playful methodology leading to clear and yet somewhat surprising results.

In his work titled What is a Chair (2005), the internationally recognized Slovakian artist Ján Mančuška used a large-scale, hand-written diagram on the wall to explore all possible aspects of the chair, starting with its physical appearance, function and material and ending with rather philosophical or social observations. We have applied a similar system to the heterogeneous depictions of the chair and the relation to its inner and outer space, which we have found in a number of works by diverse artists active in the contemporary Czech art scene. As a starting point, we took the chair as a metaphor for several tendencies we believe are present in this particular scene:

- The chair is local. It represents intimacy, basic social schemes.

- It works best when contextualized.

- It is conceptual in many more ways than Joseph Kosuth originally thought of.

- It embodies stability and a solid base.

- The chair is a pure structure, it contains nothing unnecessary.

- It will hold something or someone heavy, yet it is relatively light and fragile.

- It stands for strength, the political dimension of which is implied indirectly.

We understand these sentences as suggestions offered to the viewer in order to be re-examined within an artificial context created through this exhibition. However narrow the key of the chair might seem as a central theme and building principle, the chairs shown in this context stand for anything but uniformity. They are constellations of matter in space, but also bridges of human interaction. They are challenged, deconstructed or even destroyed, or taken as silent actors in crucial intellectual exchanges or happenings. They are treated as formal, beautiful elements ought to be perceived in their innermost details, or as mere utilitarian objects, which might even become harmful. For some artists, they constitute a point of departure towards abstraction or abstract thinking, for others they stand for the most physical counterpart of their own body and action. Together they form a specific temporary universe, where diverse elements structured by the very same law of divine mathematics sometimes resulted in the wildest forms and creations.