The act of escaping from the creative shelter of the artist's studio, from where the finished work travels to the gallery space designed for showing it, brings along certain risks. An artwork emerging on a journey from A to B, in the open air or within the urban landscape faces the danger of being mistaken for a creation of nature or pure chance, while the question of authorship gains yet another dimension. Nevertheless, for contemporary "post-Barbizon" artists it's a risk they are willing to take: to go outside, create instantly, and without any mediation. They also react to their surroundings and unexpected (weather) conditions.

This group show based on the topic of a ‘journey’ explores works by several contemporary artists who build on such a legacy in their own specific ways. It maps the journeys of both emerging and internationally recognized artists through performance or constructed narratives, installations and site-specific projects, and in some cases within a dialogue with the forms of minimalism and land art. The exhibition elaborates on the topic of movement in contemporary art, as well as the tension between the place of origin and that of presentation, the space inside and outside. 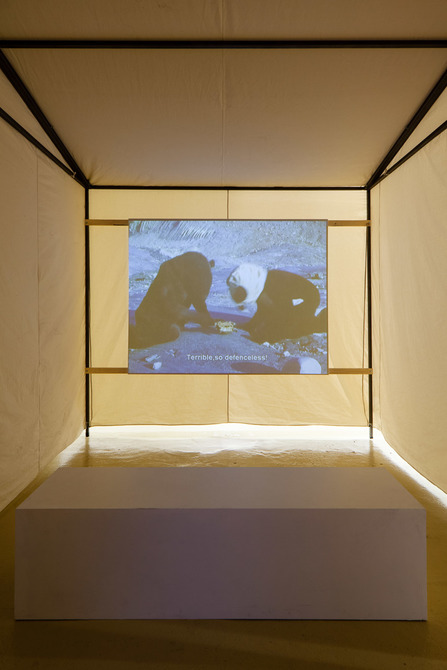 
The journey = longing. Why is it so fascinating to escape everyday stereotype and set out, be it in an urban landscape or the wild? “Wanderlust” is a human constant. The urge not to get stuck at one place, explore the unexplored. Get hands on experience, actually, or at least virtually. To get acquainted with global navigation, ignore boundaries. To take some risk, have time to think, wait for an ingenious idea or “just” for the sunset. The journey = political affair. Not all paths are passable and not all zones open both ways. Sometimes one has to choose one’s own direction, diverting from general expectations. Not to follow the crowd. Not to go for a holiday in Bibione. The journey = loneliness. You may talk to someone along the way and miss the purpose of your journey in the meanwhile. A test of courage, the need to come to terms with one’s own present. The journey makes it easier as it, unlike other things, keeps going somewhere.

For artists at the turn of the last two centuries, the way out of their studios had to do with the newly acquired freedom, but also with the loss of a privileged status. An artist with a backpack on his shoulder may be well mistaken for a vagabond and his or her work accomplished along the way for a product of nature or even for a mere coincidence. This may be a partial explanation of the monumentality of some Land Art projects that can be fully observed only from a bird’s eye view. Or quite on the contrary, a slant toward quite minimalist interventions into a landscape almost untouched by human hand, which however often ended up captured in a nicely framed photograph in some of the leading world exhibition venues, thus eventually saving their ephemeral character for eternity. By this I just mean to suggest that the world beyond the outlined trajectory from a studio into an art gallery and back has been the focus of artists for quite some time, so that the present topic is not a special discovery. Yet it keeps changing both in its raw contours and subtle nuances, depending on individual artistic attitudes and the more general situation in the contemporary art. While in the time of the Barbizon School and beginnings of Land Art the outcome of a journey was still a physical work, be it a landscape painting or a nest made of meticulously piled up flat stones, a shift towards performance and conceptual art provided the journey itself with much greater meaning. The fateful encounter of two artists in the middle of the Great Wall of China or the sudden escape across the Old Town Square from a bunch of friends became the very focus of the artist’s interest, the motion became an end in itself. For the emerging generation of artists, the journey may be a surrealist return to the past, a physical contemplation of weather conditions while driving a car, a collective picking of artifacts, a parachute jump. It may materialize in monumental installations, or stay at the level of a personal memory suggested by more subtle media.

When a journey becomes the theme of an exhibition, a kind of inimical element enters the game: the static, impersonal art gallery, which artists through the last century tried to conquer so many times, breaking its walls with an excavator, digging tunnels under it. And yet, their craters were just large scale pictures perfectly framed by the four white walls. In this sense the exhibition at the MeetFactory Gallery is more considerate, be it only for the reason that a twice-told joke is no longer funny. Its domain is the ‘here and now’: this summer, at this very place between the rails and the highway, where the artists meet who circled the world or perhaps just reached their village end, yet in both cases on quite personal and relevant grounds. The exhibition’s mood is lighthearted, yet its approach to its journey is most serious. Its longing is to defy stagnation.